With the new government mandate in place, every new car sold on the road shall come with at least one airbag. Airbags have proven to be an efficient way to reduce the impact of a crash on the occupants of the car and prevent injuries and in some cases even fatalities. A car has a number of sensors present in it, which can detect sudden deceleration, sudden jerks or any other anomaly and trigger these bags of pressurised air, which inflate in a matter of microseconds. Normally you’d think this would happen during a crash, however, Mr Delzon Chhoi claims to have triggered his airbags by going through this rather large pothole, or should we call it a crater?

Mr Chhoi claims that the car hit the pothole which is near the Wadala exit of the freeway, and is quite deep. Not only did it damage the rear bumper of his lovely red car but it also triggered the airbag sensors which made the bags pop out. Although they are great life-saving aids, airbags also potentially can do more harm than good in some cases. However, it seems that Mr was alright after this incident. That said, he would now have to shell out an estimated INR 2.5 Lakh to have his car repaired. Once deployed, the airbags need to be replaced, along with the whole dashboard from where the passenger side airbag pops out and the steering wheel which holds the driver side airbag. He has even posted a picture of the deadly pothole which took his lovely car, a Volkswagen Polo, out. 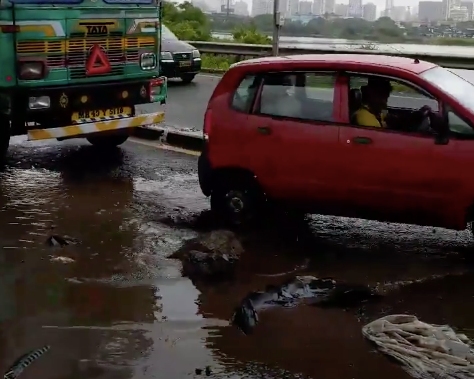 Also Read: End Of An Era – Volkswagen Beetle Production Comes To An End

The Volkswagen Polo was amongst the first cars in our market to offer standard ABS and dual airbags across all trim levels. The car is offered with a choice of 3 engines, 1 diesel motor and 2 petrol motors. The 1.5-litre oil burner engine, offering 90 Ps & 230 Nm, does the job on the regular variants of the Polo while in the GT TDI variant it generates 110 PS and 250 Nm. Both these engines are paired with a five-speed manual transmission. For fans of petrol engines, Volkswagen offers a 1-litre, 3-pot motor generating 76 PS and 95 Nm and a 1.2-litre turbocharged petrol motor, generating 105 hp and 175 Nm is offered in the GT TSI variant. While the former gets a five-speed manual gearbox, the latter uses a 7-speed DSG automatic. Prices of the car range from INR 5.71 Lakh to INR 9.72 Lakh.