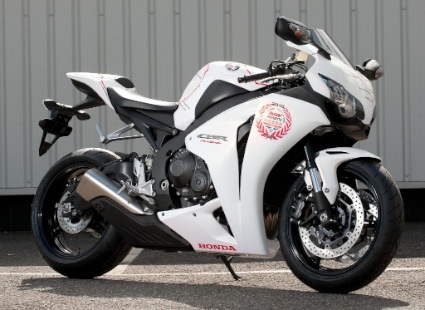 Honda has launched two Special TT Edition Fireblades to commensurate the achievements of Ian Hutchison and John McGuninness’s at this year’s Isle of Man TT.
Incase, if you were busy with other crappy things in your life and decided to miss the TT action, Hutchison was the guy who won all the five races at the event- an achievement never recorded before and McGuinness’s is still the fastest man at the TT course who holds the lap record of 131.578 mph. The Fireblades dedicated to both these legendary riders are dubbed as ‘Hutchy’ and ‘McGuinness.’
The ‘Hutchy’ CBR1000 RR dons a brilliant whit paint scheme that features a map of the 37.73 mile Isle of Man TT course, outlined around the top of the bike. The mountain course is highlighted by a red line, complete with corner names. All five victory’s of Hutchison and his overall TT Championship victory are reflected on both sides fairings of the ‘Blade and Ian’s unique ‘Hutchy’ graphic is plastered on the tank.
On the other hand, ‘McGuinness’ Special Edition Fireblade dons the look of a pint, complete with dew drops of condensation on the fairings and a creamy white head. John’s bike is also adorned on the fairings with a gold map of the TT course and his lap record of 131.578 mph.
Ian Hutchison remarked, “It’s exciting and really nice of Honda to make these Special Edition bikes. Better still, I’ve been given the first one which is such a lovely gesture. It’s an awesome bike to ride the Fireblade – how we did in the Superstock race shows how good it is. I won’t be riding mine though: it will be going straight in the living room! On the paintwork, the skill and attention to detail is just stunning. When you go up close, you can see just how pearlescent the white paint is, it’s an amazing piece of work.”
While McGuinness said, ”I’m so proud to have a Special Edition bike like this. I’m honoured that Honda has recognised my achievements at the TT in this way and it cheers me up after a 2010 Isle of Man campaign that was hit by bad luck. I feel part of the Fireblade programme now with my wins on the current ‘Blade and previous versions, so it’s very special to know people can buy this bike. With the one that Honda has given me, like Hutchy, I’m not going to use it, it will join my collection. I’ve got an older style ‘Blade, a V-twin SP-1 and a number of other Hondas. I’m always going to keep hold of it. The paintwork is amazing and every owner’s bike will be unique, as each of the bubbles on the bodywork is done by hand and different every time. It’s a work of art.
Both bikes are autographed by the respective legends of Isle of Man TT and are available in both standard and ABS- equipped versions.
News
,
Comments
Leave a Reply Cancel reply