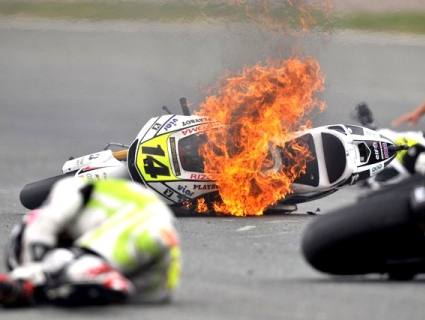 The 2010 German GP of Sachsenring could be one of the most dramatic races this season. There are two reasons; first, the nine time world champion Valentino Rossi was back after missing 4 races in succession and second, the race was red flagged just after 9 laps and as a result, restarted!

The original race was brought to an immediate halt when Frenchman Randy de Puniet crashed and broke his leg on Lap 9. A.Espargaro and A. Bautista were other two riders involved in the crash. Nine laps into the race De Puniet crashed at Turn 4, and in the process took out both Rizla Suzuki’s Alvaro Bautista and Pramac Racing Ducati’s Aleix Espargaro. The incident was made even more dramatic when De Puniet’s bike burst into flames. At this time the top-five order was Lorenzo, Pedrosa, Stoner, Andrea Dovizioso and Rossi. All three riders who were involved in the crash were unable to continue in the restarted race after they failed to make it back to pit lane within five minutes of the red flag. Suffering extreme disappointment was De Puniet, who sustained fractures to his left tibia and fibula in the accident.

After 25 minutes the race was restarted and Mika Kallio of Pramac Racing Ducati took an early crash while heading into Turn 1. Edging slightly ahead of the competition on the opening lap was Pedrosa, but Lorenzo was right alongside the Honda rider and he was able to power ahead of Pedrosa for the early lead. As Lorenzo tried to fend off Pedrosa, Stoner ran third with Rossi and Dovizioso battling behind him for the fourth position. Despite riding with a bum leg the Doctor eventually overtook Dovizioso, pushing the Honda rider back to fifth.

For more photos and final standings, head over to the next page>>>

Up front the battle for the lead intensified as Pedrosa caught up with Lorenzo. The two began swapping positions back and forth, and in the process Pedrosa set a new circuit record on Lap 10 and once again on Lap 12. After breaking his own record and consistently riding in the low 1’22”s, Pedrosa crossed the line in first with 3.355 seconds to spare. Lorenzo took second after a solid run, and added another 20 points towards the championship.

Stoner rounded out the podium in third after beating Rossi at last corner. It was one of those moves which Rossi usually performs on his rivals. “I didn’t expect this! I thought it was maybe possible to make fourth or fifth place but I thought it would be very difficult,” said Rossi. “In the end I was fourth but I had a great battle with Casey and I was so close to the podium, so this is a fantastic result after missing four races.” Finishing fifth was Dovizioso, with San Carlo Honda’s Marco Simoncelli taking his best premier class finish of his career in sixth. Americans Nicky Hayden and Ben Spies took seventh and eighth respectively, while Paginas Amarillas Aspar’s Hector Barbera and San Carlo Honda’s Marco Melandri rounded out the top 10.