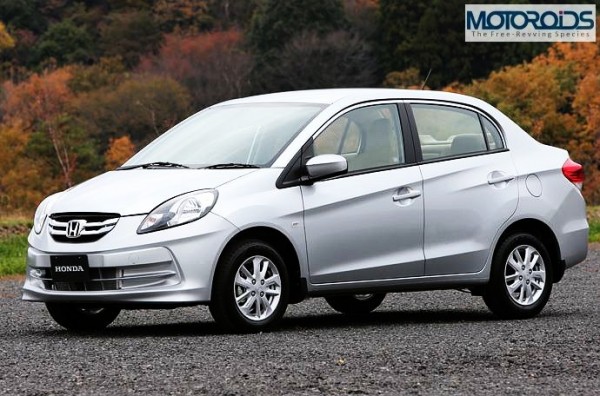 The Brio hatchback based Amaze entry level sedan from the Honda has to be among the most awaited car launches in India. While the Brio Amaze sedan will be launched in India on April 11, we have got to know almost all the details of the new car.

The Honda Brio Amaze measures a little less than 4 metres in length and will hence get excise duty benefits from the Government of India. This means that there are very good chances that the car will be launched at a really attractive price point.

The Honda Brio Amaze will, in all probability, make life tougher for the high selling Swift Dzire and the likes.

Honda has done a decent job with the exterior styling of the car and we won’t have to digest oddball looks like those we saw on the last generation Dzire. Talking about the interiors, the car will be strikingly similar to the Brio hatchback on the inside. Both the cars will share a lot of parts with each other. The leg space for rear passengers is higher in the Amaze sedan than that in the Brio hatchback. This is courtesy the increased wheelbase that the Amaze has.

The India spec Amaze will get two engine options- a 1.2-liter i-VTEC petrol engine and a 1.5-liter i-DTEC oil burner. The petrol engine has been borrowed from the Brio hatchback and will offer a max power output of 90 PS and peak torque figure of 110Nm. The oil burner has been developed alongside the much hyped 1.6 litres Honda iDTEC diesel engine and will become the first diesel engine from Honda India. The 1.5litre motor of the Amaze has a max power figure of 100PS and a peak torque figure of 200Nm. Hence, the car is much more powerful than the Swift Dzire.

The Brio Amaze is only 26kg heavier than the hatchback sibling and would deliver great fuel efficiency. TheEconomicTimes reports that the 2013 Brio Amaze diesel could deliver a fuel economy figure of an astounding 26 Kmpl!

We can’t wait to test the new Honda Brio Amaze sedan. What about you?