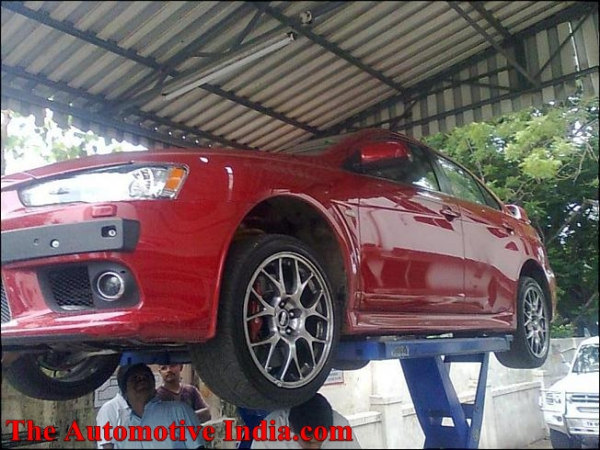 [Thanks to TheAutomotiveIndia.com who managed to capture the soon to be launched car on their cameras, we now have some pics to feast our eyes on before we get the car here. Check out the gallery on the bottom of this page.]

Have you ever fantasized playing your favourite driving PC game with your city chosen as the track?

But its too late now. Because now you dont have to do that in the virtual world, thanks to manufacturers like Mitsubishi, you can actually drive your dream cars in the real world lest you have the money to spend.

We all love the Mitsubishi Evo. Be it Tommi Makinen, Gaurav Gill or your younger brother who loves driving this car in his PC game, everyone knows what a car this is. And now you can also lay your hands on one, finally! The car will officially be available in India by the second week of July.

The car in its FQ300 variant, the one we are getting, has a 2L turbocharged engine good enough to produce 300PS and a healthy 407N-m of torque. But these specs are not confirmed for India as the engine and the ECU will be tuned in order to make it usable with the petrol available here. The car should be priced at around 40 lakhs but the final specs and the price isn’t out yet but rest assured we will update you on that.