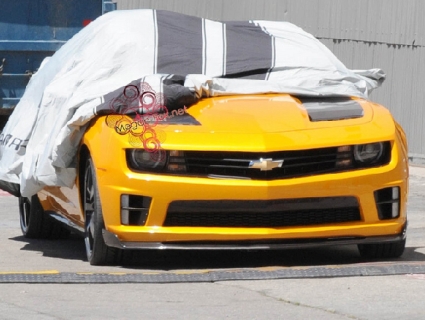 Most of us petrolheads drooled over the hot and shiny yellow Camaro as we munched on the pop-corn while watching ‘Transformers 2: Rise of the fallen’. Some of us lucky buggers even caught a glimpse of the ‘Chevrolet Camaro Autobot Bumblebee’ at the Auto Expo in Delhi earlier this year. Now it seems that the Camaro has developed some kind of insecurity since the upcoming Transformers 3 flick also features the Ferrari 458 – and so the iconic muscle car has undergone a makeover for the new movie. Before you scroll down to the images, the changes include new rims, repositioned stripes, new side skirts, newly added front splitter, redesigned fog lamps and a rear carbonfiber spoiler. The Camaro also sports new side-windows which are pointy than the previous version. The overall streamlined design seems to be mimicking the Chevrolet Stingray Concept (Sideswipe) with its carbonfiber ORVMs. Furthermore, there were some rumors that suggested that Megan fox was ditched for this one. We totally agree that the Ferrari 458 looks hotter than Megan, but as the pictures suggest, the celebrity has decided to stay with the Transformers franchise.