Home News This is IT! Highly Anticipated 2014 Porsche Macan leaked ahead of LA Debut 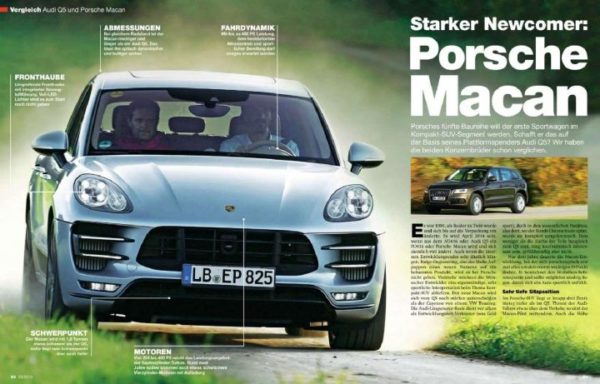 Honey I shrunk the Cayenne!

So this is IT! After several spy pics and teasers, we have finally got to know what the highly anticipated 2014 Porsche Macan would look like. While Porsche is yet to unveil the 2014 Macan, the pics you see here leaked over internet today. The official unveiling will only happen at the 2014 LA Auto Show. These images are scanned copies of pages of upcoming issue of Auto Motor Und Sport magazine.

As we have known since time immemorial, the Macan looks very similar to the Cayenne. However, worth mentioning is that while the designers at Porsche have borrowed plenty of design cues from the Cayenne, they have done a great job with giving the Macan its own identity. Being shorter, the Macan definitely looks more athletic.

The Macan will come with 340 PS and 400 PS V6 engines. It is being said that the Macan would also get a turbocharged 2.0-liter four-cylinder diesel unit. All the engine variants will come with an electromechanical AWD system.

Production of the Macan will commence in December this year and deliveries are expected to begin in early 2014. The Macan would have a base price of 52,000 dollars in the US of A.

Porsche aims to sell around 75,000 Macan SUVs in the first year of its launch. The car will be seen rivalling the BMW X3 and the Audi Q5 and is expected to go on sale early next year.

Go to next page for all the pics