The Hero Xtreme 160R was first revealed at Hero’s CIT facility shortly before the lockdown ensued. It managed to attract a lot of attention because, for the first time in years, it looked like the perfect motorcycle which could turn things around for the largest two-wheeler manufacturer in the world. It belongs to the power-commuter segment where they were the first movers. Hero did hit a rough patch in the middle but things are looking well sorted now.

When the Xtreme 160R was first unveiled, it was expected to reach showrooms shortly after but curse the pandemic, the launch of the same has been constantly delayed. There’s finally an update regarding the Xtreme 160R. Hero Motocorp has put up a separate section on their website where one can book the Xtreme 160R for a test ride. 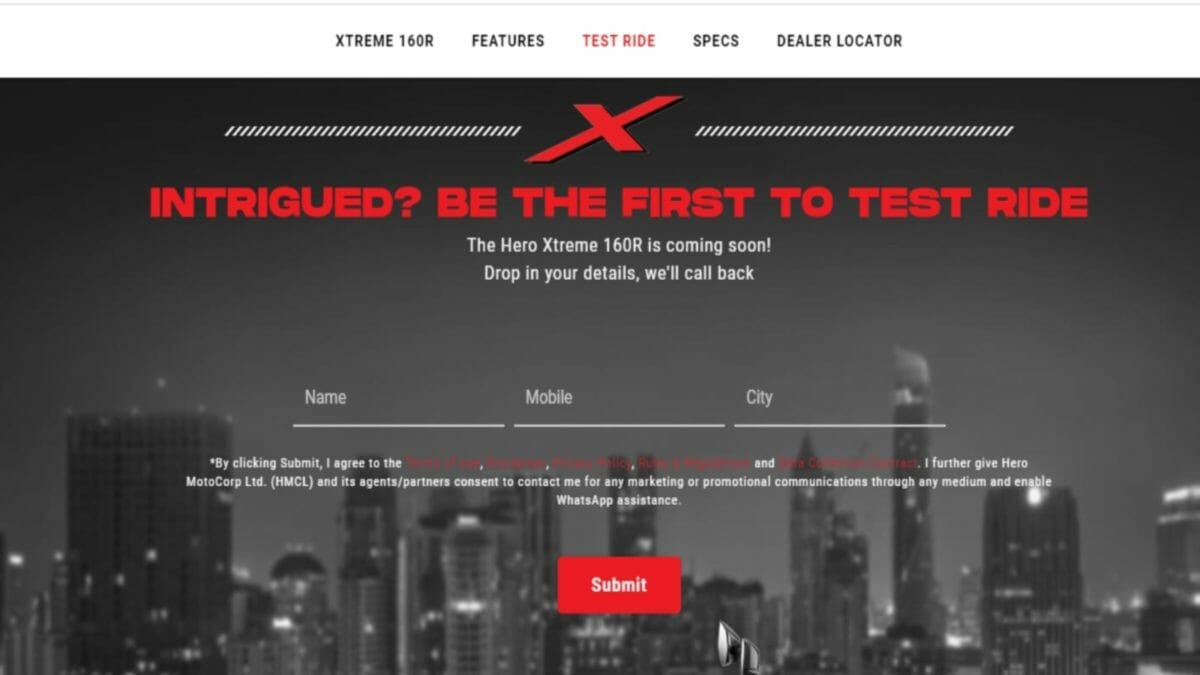 The webpage reads ‘Intrigued, be the first to test ride’. Intrigued? We most definitely are! The webpage also says that the Xtreme 160R is coming soon and it hints that the launch is most definitely just around the corner. The motorcycling fraternity finally agrees to the fact that Hero Motocorp has managed to develop a product which can fight it out with the competition, in terms of appearance, kit and performance.

Powering the new Xtreme 160R is a 160cc air-cooled BS-VI Compliant engine with Electronic Fuel Injection. The motor delivers a power output of 15 Bhp at 8,500 RPM. Tipping the scales at 138.5 Kg, the bike promises to sprint from 0 to 60 Km/hr in 4.7 seconds. The engine is mated to a 5-speed constant mesh gearbox and a multi-plate wet clutch. If we compare the above-mentioned specs with the rest of the competition, the Xtreme 160R’s on-paper performance betters most of its arch-rivals.

In typical Hero Motcorp style, the Xtreme 160R appears to offer a balance of comfort and sportiness and boasts of an ergonomically optimized set-up for the rider. It features 37mm Telescopic front forks and a 7-step adjustable rear mono-shock suspension. At the rear, a 130/70-17” radial rear tyre promises to offer grip in all riding conditions and braking duties are carried out by 276mm front & 220mm rear petal disc brakes. Ground clearance stands at 170mm.

Also read: How The Xtreme 160R Could Turn Things Around For Hero Motocorp

It’s not just about the performance and the cycle parts included in the package, it is about how it all comes together visually. And to be honest, until now, Hero’s products would take the last seat in this department, but with the Xtreme 160R, things look promising. In our opinion and also of those who’ve been giving us their feedback in plenty, the 160R looks better and sportier than its elder sibling, the Xtreme 200R! The only thing which is going to decide the fate of the Xtreme 160R is how aggressively Hero prices it, how it feels in the saddle compared to the competition, and then it would be safe to say that they’ve begun a successful ascent towards the premium motorcycling space.