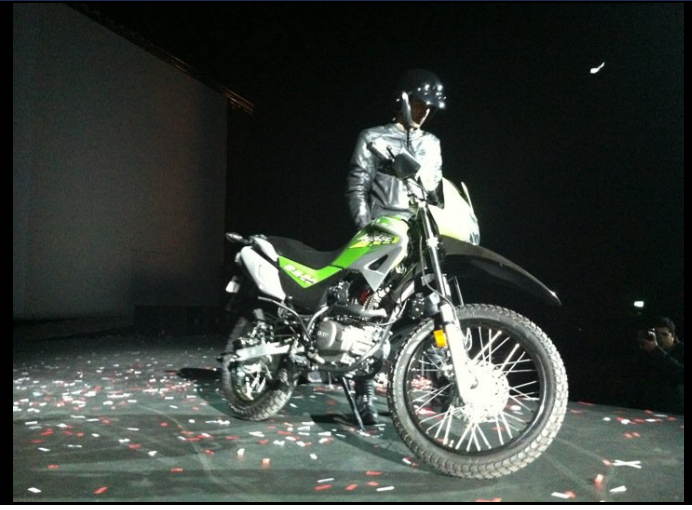 As we told you a few weeks back, hero Group was supposed to unveil its new brand identity today at London. Well, the company has unveiled its new brand identity in London today, along with the new150cc dirk bike  for India which was caught testing a few days back. The new Hero MotoCorp logo has been unveiled in a grand event in the presence of stars such as Ranbir Kapoor, Shah Rukh Khan and Akon.

Representatives from Overdrive magazine are present at the event right now and are covering the show live. Apart from the announced dirt bike, the pictures of the scooter you see are that of the Maestro ‘masculine’ scooter, targeted specifically at the male audience.

The new logo for Hero Motocorp has the word Hero with a capital H, and rest of the letters in lowercase.  The brand identity adorns red and black colours over a white background. The logo also comprises of a triangle, a parallelogram and a trapezoid as its part which together form the ‘H’ representing Hero in 3D.

Hero MotoCorp has roped in Ranbir Kapoor as its brand ambassador, while AR Rahman has composed a new brand anthem for the brand. Starting its life sfresh without its Japanese partner Honda, the company targets 45000 crore in sales in five years as well as sales of 1 crore units annually.   10 percent of these sales are expected to be exports.

Hero is also gearing up for a major expansion plan, with a new components plant in Rajasthan, followed by a plant in South India. This will be followed by another plant dedicated to the export market in Gujarat.

Here are some pictures, followed by the official Press release

Dr. Brijmohan Lall, Chairman of the New Delhi-headquartered Hero MotoCorp Ltd., said “We have made a new beginning today which is filled with a lot of promise. While we will always look back with a lot of satisfaction at our achievements over the past 25 years, we will also now strive to replicate this glorious performance on the global stage. While we have been able to achieve all this due to the contributions of all our associates, be it our dealer friends, suppliers or employees, I have no doubt in my mind that we would not have possibly reached where we are today without the trust of our customers. I wish to thank them from the core of my heart and assure them that the ‘Customer’ will continue to remain at the core of everything that we do in future too. I am certain that with our new range of products, services and ever-spreading network, Hero MotoCorp will continue to spread customer delight in every market that it goes to.”

Unveiling the all-new logo of Hero MotoCorp and the new theme song, the firm’s Managing Director and Chief Executive Officer Mr. Pawan Munjal said “The new Brand Hero epitomizes continuity and change in equal measure. While its fundamental values and enduring beliefs ensure continuity, the new proposition and identity also signal change. The new logo stands for the new face of India – that youthful energy and ‘can do’ spirit. It is in true sense the “Indian Catapult” which signals that while it is deeply rooted in Indian values, it is also poised to go for global expansion – a Leap of Faith.”

Addressing the over-1000 strong audience comprising of the firm’s dealers, senior employees and other associates who had travelled to the historic city from all parts of India, Mr. Pawan Munjal also outlined his vision for the young company.  “In the next five to six years, we are aiming for a Perfect 10 – annual sales of 10 million units and annual turnover of US$10 billion with overseas business contributing about 10 per cent to our total annual volume sales. We have identified key countries in Africa, South East Asia and Latin America as our potential markets. We should be starting exports to some of the countries in Africa towards the next quarter of this fiscal. We are enhancing our Research & Development (R&D) set-up, hiring the best talent, and exploring opportunities for collaboration with international design houses and technology suppliers.”

The launch of “Impulse” creates a new experience in the Indian biking industry. The dual purpose on-road-off-road bike adds to the excitement every young man wants. The feature-loaded bike takes the rider where his excitement wants him to go by giving him freedom from roads. “Impulse” is loaded with versatile features including  nitrox-gas filled mono-shock rear suspension which ensures a smooth ride on roughest of terrains, high ground clearance with large dial front wheel with stud-type tread pattern tyres and large front disc brakes which lets the rider traverse any road or any stretch.

The new 110 cc scooter “Maestro” comes with a New Generation V-Matic engine and Advanced Microprocessor Ignition (AMI) with TCIS for a flawless performance. Its variomatic drive delivers optimum power and seamless acceleration at all speeds. “Maestro” has a stunning digital–analog meter console, with service indicator that lets the user know when the service is due. Scooter is equipped with a combi-brake system, magnetic head ignition key with shutter and tuff-up tubes that gives you unmatched safety and convenience. The anti-slip texture of the floor area and foldable pillion foot peg adds to the safety of the rider.

Maestro is the second scooter from the Hero MotoCorp stable, after the overwhelming success of its first scooter Pleasure.