It is official! After refraining from revealing the power figures in the spec sheet, Hero MotoCorp has finally disclosed that the upcoming Hero Karizma ZMR 2014 would have a max power of 20 bhp. The updated bike’s motor offers a peak torque of 19.7Nm@6500 RPM. With this, all the rumors related to the bike’s engine power can be quashed and we finally have a fair idea of the soon-to-be-launched bike’s potency. 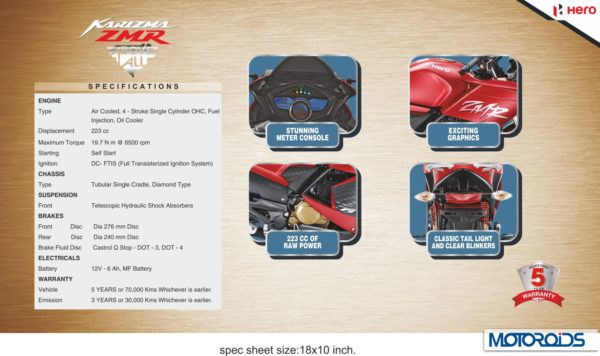 The power-torque figures of the updated bike leave us wondering about the extent to which Eric Buell Racing (EBR), Hero’s partner, has played a role in the development of the ZMR 2014’s engine. It may be noted that it was being speculated that the new ZMR, with 24 PS of max power, would take the fight straight to the likes of KTM 200 Duke and would easily out-perform its arch rival Bajaj Pulsar 220. However, it seems like the performance enthusiasts out there would have yet another reason to complain, what with really ordinary power figures of the ZMR 2014?

Worth mentioning here is that the new ZMR 2014 will soon become the first Hero product that will come to us with an engine developed with inputs from Eric Buell Racing. Talking about the engine, Mr. Munjal has previously said, “There is a lot of innovation happening in our own R&D and we will bring it to the market through some of the products we will launch. We have applied for patents for those innovations. This is showcasing our capability. We will be launching the new Karizma variants which are redesigned and the engine made more powerful with our partner EBR. This is the first commercial production model in which they have played a big part in development.”

While there is no denying that the updated ZMR has a more powerful engine, we do feel that Hero MotoCorp has missed an opportunity to bestow the popular Indian performance bike with class leading power-torque figures.

What do you say? Do you agree with us? Do let us know by commenting below.