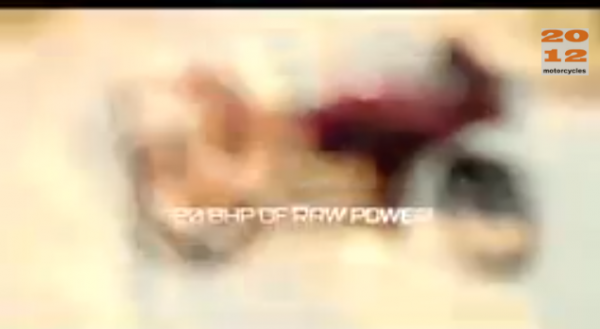 Few minutes back, we posted engine specifications of the new 2014 Hero Karizma ZMR and now, we have the recently released TVC of the soon-to-be-launched bike.

Hero Karizma ZMR 2014’s TVC wants to make us believe that the refreshed ZMR ‘is the God of bikes’ and shows the Hero flagship indulging in some stunting and setting the road on fire! While the TVC does a good job with highlighting the updated bike’s new features, we feel that the tagline and the way in which the bike’s performance has been displayed is quite an overkill. .

The new Hero Karizma ZMR 2014 has a max power of 20bhp and a peak torque of 19.7 Nm. It is being said that the bike’s engine has been developed with inputs from EBR and we feel that the bump in power would make the ZMR sufficient potent to have performance figures at par with those of the arch rival Bajaj Pulsar 220.

The Hero Karizma ZMR 2014 is likely to go on sale by the end of next month and could be marginally pricier than the pre-facelift model.

What do you have to say about the updated ZMR’s TVC? Don’t you think Hero is being a bit over-optimistic with its updated warrior’s engine performance?