We’d soon bid adieu to the third generation Hyundai Santa Fe as the South Korean car maker will replace it with the fourth generation model. The next iteration is expected to arrive in 2018, most likely to be launched in South Korea first, followed by a global launch soon after. The next generation SUV is undergoing pre-production tests and a test mule of the 2018 Hyundai Santa Fe was recently snapped by Instagram user emiya_mool_jomdao.

The test mule was heavily camouflaged, thus hiding the finer details, however the Instagrammer did confirm that the SUV appears to have “grown somewhat larger than the previous generation.” It appears that the spied test mule is a three row version of the SUV also known as the Grand Santa Fe in certain markets. The test mule also featured black coloured, diamond cut alloy wheels. 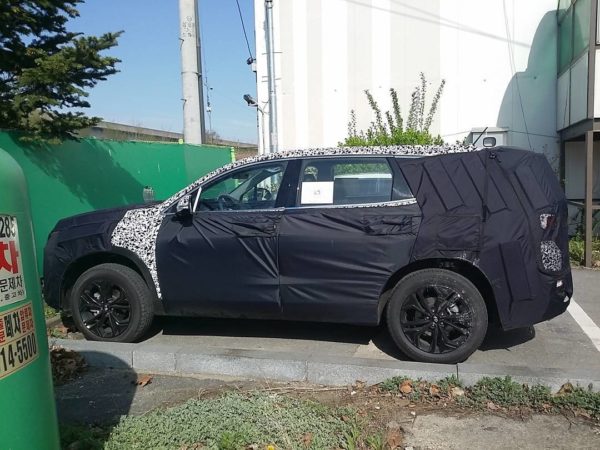 The next generation model is expected to arrive next year. We really cannot tell much about the upcoming SUV as the test mule is heavily camouflaged. However, there is a good possibility that the fourth generation model will feature a revised front fascia which will be derived from the recently announced Hyundai Kona. The all-new Hyunda Kona is a B-segment SUV which will be the fourth member of the brand’s SUV family in Europe consisting of Grand Santa Fe, Santa Fe and Tucson. It’d be safe to assume that the fourth generation model will also receive touchscreen infotainment system, which will support Mirror Link, Android Auto and Apple CarPlay.

It’d be too soon to comment about the mechanical details. We’d keep you posted as soon as we lay our hands on more concrete details. Meanwhile, let us know your views about the next generation Hyundai Santa Fe through the comments section below.