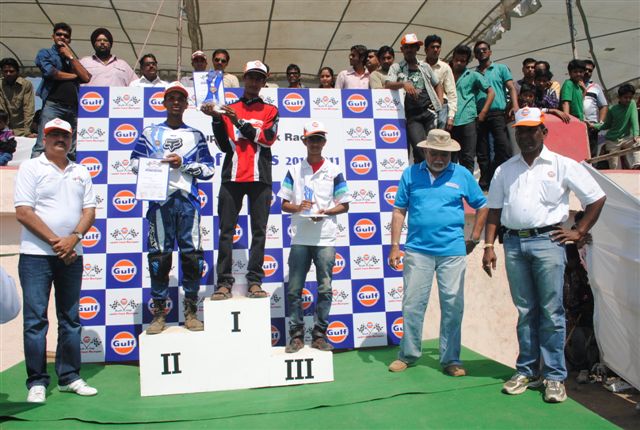 The TVS trio of C S Santosh, Arvind KP and HK Pradeep cornered the glory in the third and final leg of the Gulf Dirt Track Racking at the BHEL Dassera Ground in Bhopal on Saturday.

All three Bangalore riders, who were at the forefront in last season’s dirt track races, came up with brilliant displays to win a class each in the glamour events of the third round, organized by Sportscraft ,  ahead of Sunday’s ultimate round – ‘Clash of the Titans’.

Certainly, they are the favourites going into Sunday’s Clash of Titans which pits only the best riders from the previous three rounds.

Santosh was given a tough time by his TVS mates from Bangalore, but his flexibility and deft maneuvering over the serpentine bends proved decisive in his impressive showing.

While Pradeep and Arvind placed second and third respectively in the first race of the Indian Expert Class Group A Foreign Motorcycles upto 260 cc, they reversed the order in the second race as TVS completed a clean sewwp.
The goodly crowd that turned up on a chilly morning was left in awe as riders went through the motions in the event, organized by Sportscraft in association with Bhopal Automobile Sports Club.

If Santosh and Pradeep stole the honours in the Indian Expert class, it was R Prakash of Coimbatore who excelled in the other glamour event, the Private Expert Class for foreign motorcycles 260cc 2 & 4 stroke. He won both the classes, which saw Vineet Kurup and Nagpur’s Jatin Jain finished second and third respectively in one of the races in the class and  Nashik’s Shamim Khan and Kurup in that order in the second race.

Gulf Oil has over the years spared no effort in giving two-wheeler riders an opportunity to test their skills under a safe environment with events like Dirt Track Racing and the Monsoon Scooter Rally. Saturday’s event in Bhopal was no less challenging, as the course laid out by Sportscraft was really tough.

In addition to the sharp bends there was also loose gravel and water-logged areas to negotiate, which made riding a dicey proposition. However, all riders, first timers included, displayed excellent skills to come through this test of man and machine in flying colours.

There was huge cheering when the Novice class was run. But Coimbatore’s Santosh Kumar dashed local hopes as he beat Bhopal’s Mohammad Ali Khan in the Group C class for 165cc motorcycles. Khan gave a good account of himself but had to settle for second place, ahead Calicut’s Sarat KP.

Naresh also won the second race in the class, beating Varun CV and Bhopal’s Yasir Ishaq, who had to settle for second and third places respectively.

While the crowd that turned up was appreciative of the event, the riders too were all praise for Sportscraft’s conduct of the event, which saw the races being gone through with precision efficiency. Surely there’s be a bigger crow to was the Clash of Titans on Sunday.

The country’s leading riders gave Bhopal’s motorsport fans something to shout about as they went through the motions in the third leg of the Gulf Dirt Track Racing and Clash of Titans at the BHEL Dassera Ground over the weekend.

If they got a glimpse of what dirt track racing was all about when the third leg of the event, organized by Sportscraft, was run on Saturday, the Clash of the Titans, which pit only the best riders of the previously held legs in Hyderabad, Nashik and Bhopal, that followed on Sunday was a virtual feast of top class riding.

H K Pradeep and Arvind KP of TVS Racing Team came up with brilliant displays in the Clash of the Titans’ to emerge the undisputed kings of dirt track motorcycle racing in India.

Bangalore riders Pradeep and Arvind showed the class champions are made of to upset the applecart of their TVS Racing teammate C S Santosh, who was favourite going into the Clash of Titans after the brilliant display on Saturday, and take the honours, as the trio proved a distinct class above the field.

Like in the previous rounds, Pradeep and Arvind, astride TVS bikes, were clear winners in the Indian Expert class Group A for foreign motorcycle despite being challenged all the way by Santosh and Barguje.

Much was anticipated from this Clash of the Titans, and none disappointed as they went through the motions on a specially-laid out course at high speeds, their superbly prepared bike raising a dust storm all over.

The course laid out by organizers Sportscraft was really tough. In addition to the sharp bends there was also loose gravel and slushy areas to negotiate, which made riding a dicey proposition, but all riders displayed excellent skills to come through this test of man and machine in flaying colours.

If the above-named champions dazzled, Coimbatore’s R Prakash was not far behind in his riding skills as he took one race in the Private Expert class for foreign motorcycles upto 250cc 2 & 4 stroke and finished second behind Girish KC of Kerala in another. The duo were challenged all the way by Nashik’s Vineet Kurup and Shamim Khan but clever maneuvering around the sharp bends won them the day. Kurup and Khan could only place second and third in one of the two races.

Bhopal’s Mohammad Ali Khan gave the home fans lost to cheer as he beat back a stiff challenge from Santosh Kumar of Coimbatore to win one race in the Novice class for bikes upto 165cc 2-stroke and upto 130cc. Bangalore’s Naresh VS of TVS Racing Team won the other race in the category.

For riders and public which came in large numbers, this Gulf Oil event was certainly one to remember. They had two days of two-class action from the best riders and their bikes. The manner in which it was conducted left no room for complain from any quarter. After all, Sportscraft’s usual competence in running events with clock-like precision made it possible.