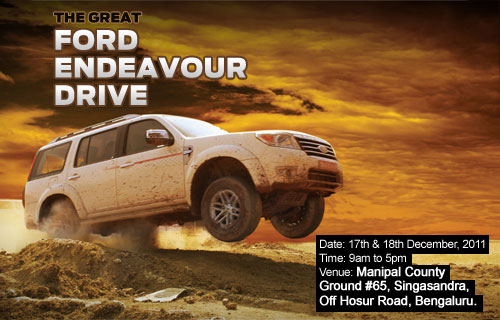 Very soon, expect us to talk about our rendezvous with the heavy duty Ford Endeavour SUV. The event is being called as ‘Great Ford Endeavour Drive’ and will be held at Bengaluru this weekend. We have always maintained that the SUV is a capable off roader and we hold not much of a doubt about the Endeavour Drive being great. This event may prove to be a nice testing ground for us to analyse every aspect of the machine. It may be noted that the Endeavour on sale in India and Thailand is almost a re-named Ford Everest which in turn is a 5 door variant of the Ford Ranger, a 4 door utility vehicle from the American manufacturer. The aforementioned roots of this big Indian SUV are enough to let us know about the robustness of the Ford’s SUV on sale here. Motoroids team will be experiencing the drive with famous Indian rallyist  Mr. Jagat Nanjappa.

Ford Endeavour is sold in 3 variants. The base model of the SUV sports the 2.5 litre diesel engine that made its appearance when the SUV was first introduced to the country. The remaining two variants come with a more modern and powerful 3 litre diesel motor. The 3 litre variants are offered in 4×2 and 4×4 versions. The 2953 cc engine in both these versions is mated to an automatic transmission. Ford also keeps coming up with limited edition variants of the popular Endeavour SUV, the recent being the Endeavour Hurricane. Mechanically, the limited edition version is the same as the regular models but comes with more bells and whistles, both on inside and outside. The Endeavour 2.5 litre is available at Rs.17,30,859* and the 3.0 litre variants are available at Rs.18,54,766* (4×2) and Rs. 20,61,540*(4×4),

*All prices are an average of Ex-Showroom prices at various major cities across the country.