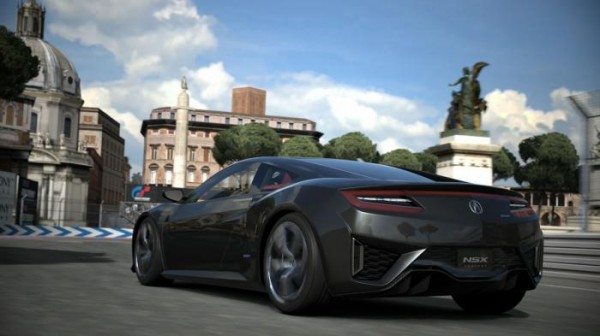 Acura has launched the much-awaited NSX, albeit in concept form, in the Gran Turismo 6!

While the Acura NSX won’t be launched in real world before 2015, those who just can’t wait to get their hands on the new NSX can saple the car in the virtual world offered by Gran Turismo 6.

The GT6 confirms that the production spec NSX will be powered by a twin-turbo V6 engine and will boast of a Sport Hybrid Super Handling All-Wheel Drive system. The powertrain sends power to the rear wheels via seven-speed dual-clutch gearbox. The twin electric motors on the front wheels contribute in making the NSX all-wheel drive. The SH-AWD system will have a combined power output of 400bhp and thanks to the torque from the three electric motors, the car will have supercar challenging acceleration. The NSX’s all-wheel drive system boasts of three electric motors that work towards providing “instant delivery of negative or positive torque during cornering to achieve a new level of driving performance unparalleled by current AWD systems.“

According to Mike Accavitti, senior vice president of Auto Operations at American Honda Motor, “Whether in the virtual world of Gran Turismo today, or on real-world roads and racing circuits less than two years from now, the Acura NSX will be an incredibly innovative and thrilling ride that delivers something entirely new to the world of super sports cars.” He went on to say “The wait is over for NSX fans eager to get behind the wheel of the next Acura supercar, and they can rest assured the actual production car will be even more amazing than the in-game concept version.“