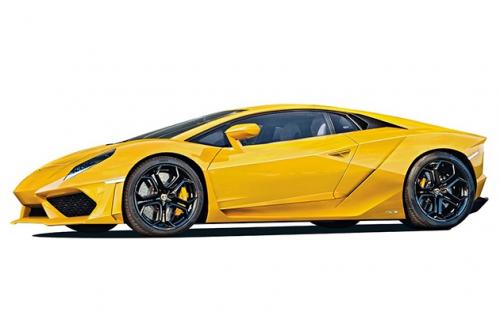 The good chaps at Only The Best have managed to get their hands on some new (and really juicy) details of the much awaited Lamborghini Gallardo successor!

Only The Best was a part of a tour of the Aventador production line and this is when they caught a glimpse of the new assembly line that will produce the Gallardo successor. They also spotted many undisguised prototypes and one of them was painted in Verde Ithaca (green) and had glossy black alloy wheels.

Based on their sightings, Only The Best have come up with a new speculative render that is being claimed to be “incredibly close” to the real deal. The guys at Only The Best also report that unlike what is being speculated, the Gallardo successor won’t be called the Cabrera. The pre production stage of the car has already commenced.

The Gallardo successor won’t get scissor doors and will feature a grille that will run across the entire length of the rear windscreen. This design cue seems to have been taken from the much loved Miura. The rear end of the upcoming model is said to resemble that of the Aventador.

The current 5.2-liter V-10 motor is likely to be carried over, albeit, with significant updates. Hence, the motor will deliver more power and lesser emissions. Max power output could be pegged at 592 hp and the car is likely to a LP 600-4. It may be noted that an engine with similar specs was unveiled with the Egoista concept. The car is expected to be launched in an all wheel drive layout, with rear wheel drive making an entry some time later. The motor will be mated to a seven-speed dual-clutch transmission.

Lamborghini has already started to tease the Gallardo replacement and will release the details of the upcoming model before Christmas.