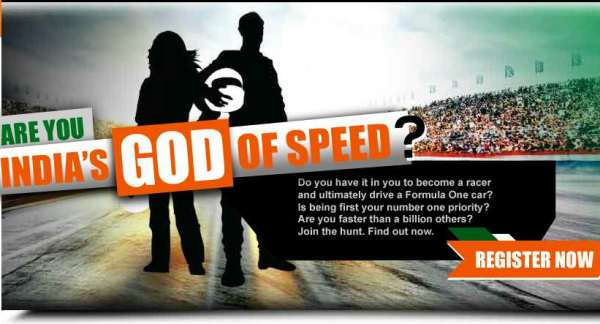 Force India, the Vijay Mallya supported F1 team is setting up a new driver academy to find and support driving talent in India.  The programme, titled ‘one from a billion’ start in April, with regional trials starting in seven cities of India.  Aspiring young racers aged between 14 and 17 years of age will be tested for lap times in a kart. The finals will happen in September, where 14 fastest racers from ach regional trial along with two wild card entries for promising racers who came close but didn’t qualify will compete.

These 100 finalists will then be reduced to 10 winners who will head to the Silverstone circuit in the UK. In the Uk, these racers will undergo a week-long session of driver tuition on Dmax Karts, fitness development, media training and two full days at Silverstone with sessions on safety, car control training, driver assessment and race procedure briefing.
After this session, the ten selected drivers will compete in a race in Formula Silverstone cars. A panel of experts will then pick one winner and two runners-up. The chosen three will then be announced at the inaugural Indian Grand Prix in October.

The first winner will be sponsored to race in a full season of racing in a competitive UK championship. The winner will also be supported by the academy throughout with the aim to develop him as a prospective Formula1 driver for the Force India F1 team.
The first runner-up will sponsored for a full season in an Indian championship. The second runner up will be trained in kart racing at some location in Asia.

“Our goal is to create a pool of talent and groom aspirants who show exceptional promise by providing them with the necessary corporate funding and support. Our programmes will provide a clear professional career path in motorsport so that one day our selected candidates are able to represent India in the international arena and hopefully bring glory to the nation” said Dr. Vijay Mallya, the team principal at Force India team.

You can visit www.onefromabillion.com for more details on participating in this programme.