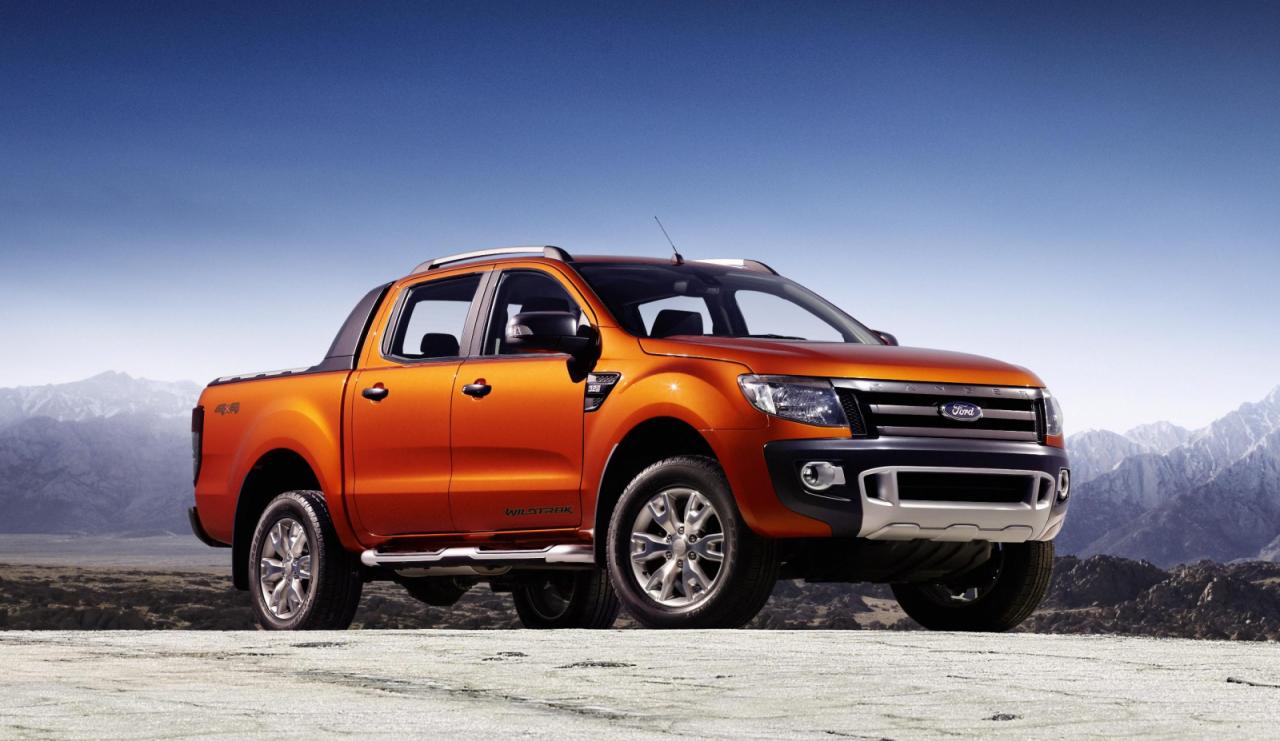 Ford Endeavour has traditionally shared its parts bin with the Ranger truck. It’s highly speculated that the new Ranger would lay the foundation of the new Endeavour / Everest, and will share the aesthetics along with components with the SUV. Ford had released the pictures of the new Ranger a few months, back, and now the company has unveiled the truck officially, along with all the details, in the UK.

The new Ranger has been designed from the ground up, and is claimed to be significantly more refined and technologically accomplished than the model it replaces. The Ranger, in its latest avatar will be powered by two engines, a 2.2-liter TDCi diesel dishing out 150PS of powerand 375Nm of torque, and another 3.2-liter monster with 200PS of power and 470Nm of train-like torque. Both engines are mated to a new six-speed transmission, available as automatic or manual models. While the manual transmission is now smoother, with a short throw and car like smoothness, the automatic has been designed to insulate the cabin occupants from the shifts altogether.

The new Ranger has been developed in Australia, and will be built in Thailand, South Africa and Argentina, to be sold in more than 180 markets worldwide, which we are sure will include India as well, albeit with the product being in the SUV guise. Here’s the press release, followed by pictures

BIRMINGHAM UK, Apr. 12, 2011– The exciting all-new Ford Ranger pick-up enters the stage on the Ford stand at the Commercial Vehicle Show in Birmingham, UK, ahead of its European sales launch later in 2011.

New from the ground up – with everything changed except its name –the Ranger has been engineered to combine the model’s traditional strength and durability with increased loading capability, improved performance and economy, enhanced comfort and safety, smarter technology and a tough new look.

The all-new Ranger is the first commercial vehicle to be built under the One Ford strategy as part of a global product programme, bringing together the full engineering expertise of Ford around the world. Developed in Australia, it will be produced in Thailand, South Africa and Argentina for sale in more than 180 markets worldwide.

New Ranger will be offered as a complete family of pick-up models with a choice of three versatile cab body styles – Single Cab, RAP (Rear Access Panel) Cab and Double Cab – along with the option of 4×2 and 4×4 drivetrains, two ride heights and up to five series choices to suit every pocket and market.

Building on Ranger’s long-standing reputation for strength and dependability, the all-new model offers an outstanding depth of capability. A larger load box offers increased carrying volume with all cab styles; generous towing capacity ranging up to a best-in-class 3350 kg; and models with the 2.2-litre diesel have an outstanding payload capacity of up to 1333 kg.

The all-new Ford Ranger is just as much at home on a leisure trip as it is delivering goods to a construction site, and the new model redefines the level of comfort, technology and safety that customers can expect from a hard-working pick-up.

A completely redesigned cabin offers generous space and superb craftsmanship, and is packed with the kind of smart technologies which are more commonly found on contemporary passenger cars. These range from features like satellite navigation, Bluetooth®connectivity and voice control, to the Rear View Camera System with a display integrated in the rear view mirror which is unique in the pick-up class.

With its incredibly strong high-strength steel passenger cell structure and advanced restraint systems – including new side curtain airbags and thorax-protecting front-seat side airbags fitted as standard across all cab styles in Europe – the all-new Ranger has been engineered to deliver class-leading safety performance.

The new model also utilises a whole suite of technologies to enhance active safety, including features like Hill Launch Assist, Hill Descent Control, and a carefully tuned Electronic Stability Program (ESP) system to help the vehicle keep its wheels sturdily planted on the road under all conditions.

Built to last, the all-new Ranger has undergone one of the toughest development and testing regimes ever undertaken for a vehicle of this type.

“Since it was introduced to Europe in 1997, the Ford Ranger has established itself as a major player in the European pick-up segment,” said Jesus Alonso, Ford of Europe’s director for Commercial Vehicle Marketing, Sales and Service. “This all-new model will reinforce the reputation of the Ranger brand with its bold new appearance, improved depth of capability for hard working businesses, and new levels of comfort, technology and safety. And with a significantly improved fuel economy this new vehicle offers both low cost of ownership and sustainability benefits. We are starting a new chapter in the Ranger success story.”

The all-new Ranger is immediately recognisable from its bold new exterior style, which its designers have named ‘21st Century Tough’.

Toned, taut and muscular, the new Ranger is designed to look powerful and confident, equally at home in an industrial estate or outside a high-class restaurant. Its front end features a short overhang with the signature three-bar grille, a global Ford commercial vehicle design cue.

The windscreen has been raked back for a sportier and more dynamic silhouette, while the traditional square form of the truck has been sculpted to give the vehicle a more modern and aerodynamic look. Larger headlamps, bigger mirrors and stamped-in wheel lips provide an integrated look across all series and contribute to an aggressive and sporty stance.

Designers also raised the beltline significantly, along with the rails of the load box, giving the Ranger a substantive presence on the road while increasing its functionality with the deeper box.At 5,359mm long and 1,850mm wide, the new model is 279mm longer and 62mm wider than the outgoing model, benefitting both interior space and load capacity.

For customers seeking a ruggedly stylish and supremely functional lifestyle vehicle, the Wildtrak version takes Ranger’s sporty appearance even further, with a unique colour split on the front.

Designers masked out the feature line on the front fascia and contrasted it by highlighting the lower intake. The same dark accent colours were used on the side mirrors, door handles and side air vents to give the vehicle a dynamic sporty look.

“Wildtrak’s aggressive look and bold new graphics are a perfect fit for those who appreciate a sporty and more expressive image. It will look fantastic transporting the latest quad bike or jet ski for weekend getaways”, said Craig Metros, chief designer of the all-new Ranger.

Sitting high on 18-in alloy wheels, the Wildtrak also comes with a roof rack and a sports hoop which enhance its profile. Exclusive Wildtrak badging and graphics help to set it apart from other lifestyle vehicles.

Ford’s new global truck will be offered in a choice of three cab body styles – Single Cab, RAP Cab and Double Cab – to suit the diverse needs of pick-up customers. All three cab styles are among the roomiest in the segment.

The two-door Single Cab is a two-seater that provides exceptional load space. For additional storage and space to seat four people, the innovative RAP Cab – first introduced on the Ranger in 2002 – has a unique four-door system that provides unobstructed access to the cabin via two forward-hinged doors and two rear-hinged access panels. The four-door Double Cab has plenty of room for five adults, providing flexibility for both leisure and business.

Engineers have optimised every millimetre of Ranger’s dimensions to give maximum interior space without compromising the volume of the cargo box. With Ranger increasingly being a work-and-family vehicle, the engineers have paid special attention to the rear seats in the truck, with the second row in the RAP Cab more spacious than key competitors.

The B-pillar in the Double Cab has been moved forward, delivering best-in-class rear leg room and knee clearance. Three adults can easily fit in the second row of the Double Cab while two six-footers can comfortably sit one behind the other.

In terms of space for loads, the deeper load box and increased length and width of the all-new Ranger have resulted in outstanding cargo capacity. The Single Cab and the RAP Cab have the biggest box volume in its class at 1.82 cubic metres and 1.45 cubic metres respectively while the Double Cab is among the top with 1.21 cubic metres.

Width between the wheel arches is 1,139mm on all models and special provisions are provided in the cargo box to place timber inserts in pockets that are located above the wheel arch. This allows plywood or sheet rock to be stacked flat. Width at the rear tailgate opening, at the top of the box, is 1,330mm.

A flexible cargo management system is available where attachment points can be moved along a rail, instead of fixed points on the body, so customers have greater choice when tying down a load.

All-new Ranger can also haul exceptionally heavy loads, with a towing capacity ranging up to a best-in-class 3,350kg, and an outstanding payload capacity of up to 1,333kg on models with the 2.2-litre diesel engine.