India is going through a transformation, people are changing, mindsets are changing and more importantly perceptions are changing. A few years ago, if anybody you knew saw you on a bicycle, unless you were a kid, for reasons best known to them, they would think your other business is either distributing newspapers or milk in the morning, both are noble professions by the way. Times have changed and if you are seen on a bicycle now, the next thing your neighbor would do is buy himself one and find reasons to talk to you about cadence, sprockets and shifters. 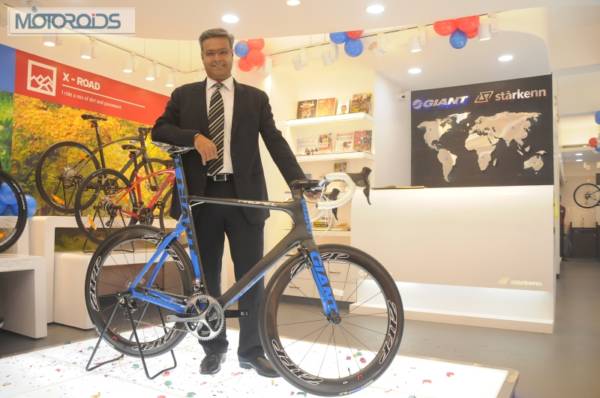 Observing this change, World’s leading brand of quality premium bicycles and bike accessories, Giant, announced its entry into Bangalore through the Giant Starkenn Cycling World which was launched today in upscale Indira Nagar. Starkenn Sports Pvt Ltd, the sole distributer and authorised marketers of Giant brand, introduced the biggest bike experience center in the city, spread across 3200 Square Feet showcasing some of the firsts like bike simulator, bike spa, bike fit, bike library, bike cafe and a huge range of bikes from Giant. They also unveiled the much talked about bike, Propel Advanced SL 0 for the first time in India, (VeloLab report has confirmed that this is the fastest bike thus far by any brand) this bike is being used by the Giant Shimano team at Tour de France including the champion biker Marcel Kittel who has won three of the eight races, and twice the Giant Shimano team came 4th, in one of the toughest races in the world. 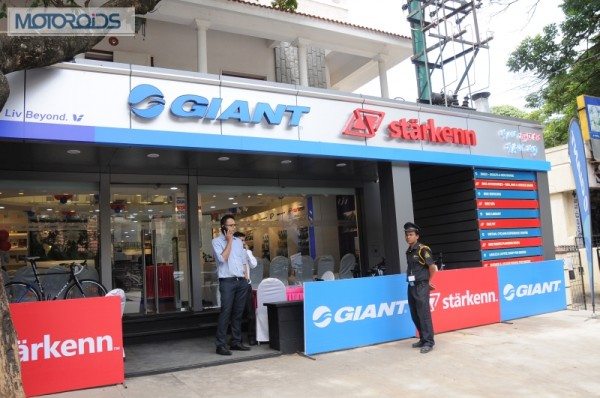 Giant bikes offer the highest levels of safety, performance, comfort and convenience for the users. With the opening of the experience centre in Bangalore, Starkenn Sports strives to further develop the biking culture already prevalent in the city by bringing premium cycling to give consumers a superior and grander experience. The company has an exclusive range of bicycles starting from Rs 18500 to Rs 10.59 Lacs having features like, light weight aluxx and carbon frames with geometries to die for. The bike range spans the entire spectrum of off-road, X-road, folding bikes, city bikes and on-road for men, women and children.

Commenting on the occasion, Mr. Pravin V Patil, MD and CEO of Starkenn Sports said, “The market of premium bicycles, although accounts for a little over 1% of the total bicycles sold in India annually, is growing over 4 times the industry average. With the Giant Starkenn Cycling World in thecity, we want to indulge into Bangalore’s growing affair with green wheels. We want to provide access and exposure to an assortment of physical activities without the negative undertones people often associate with the word “exercise” and what better way to do it than cycling. The experience center at Bangalore would showcase never seen before cycles and bike accessories bringing greater technological advancement and innovation to cater to the cycling enthusiasts of the city. Our constant endeavor is to make bicycles which match the lifestyles of our customers across all sections of society and give them a new experience of riding.”

If you plan to visit the store, here’s the address,