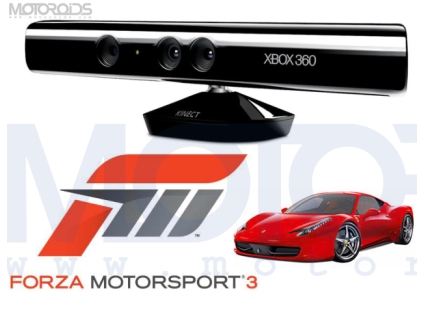 The whole gaming industry was up on its feet when Microsoft announced the Project Natal – a camera based motion tracking game controlling system that makes the conventional hand-held gaming controller redundant. Just as the E3 (Electronic Entertainment Expo) got underway in California yesterday, ‘Project Natal’ was re-named ‘Microsoft Kinect’. As you would expect Microsoft was going out all guns blowing with their new toy with a lot of demos to unleash the Kinect’s potential. Unlike the previous demos Microsoft had for Project Natal, the new demos are a lot more comprehensive and one such demo was a Kinect-ready version of the popular racing title, Forza Motorsport.

Thanks to GameTrailers, we have added a video of the demo from the E3 presentation, for your viewing. The demo shows off a scarlet red Ferrari 458 Italia in a completely interactive mode with the Kinect device. The spokesperson present at the demo shows off the interactivity by physically walking in front of the Kinect and having his actions replicated on the screen in the form of a walk around the virtual Ferrari. As he physically crouches, on does the on-screen camera, to take a closer look at the carbon-ceramic brakes! The demo also shows a quick race where the bloke stands with his arms stretched-out as if he were holding a steering wheel. A simple turn of the arms controls the steering of the on-screen car while his head moment controls the camera (dashboard view) for looking into the corner, looking at the opponents etc. However, we can’t seem to figure out how does one accelerate and brake in such a setup? Furthermore, there is no word on whether the current Forza 3 will support the Kinect through an update or will the Kinect force a new version of the Forza altogether in 2011? Your guess is as good as ours. Check the video here:

Leave your comments on what you think about the new Kinect in the box below: