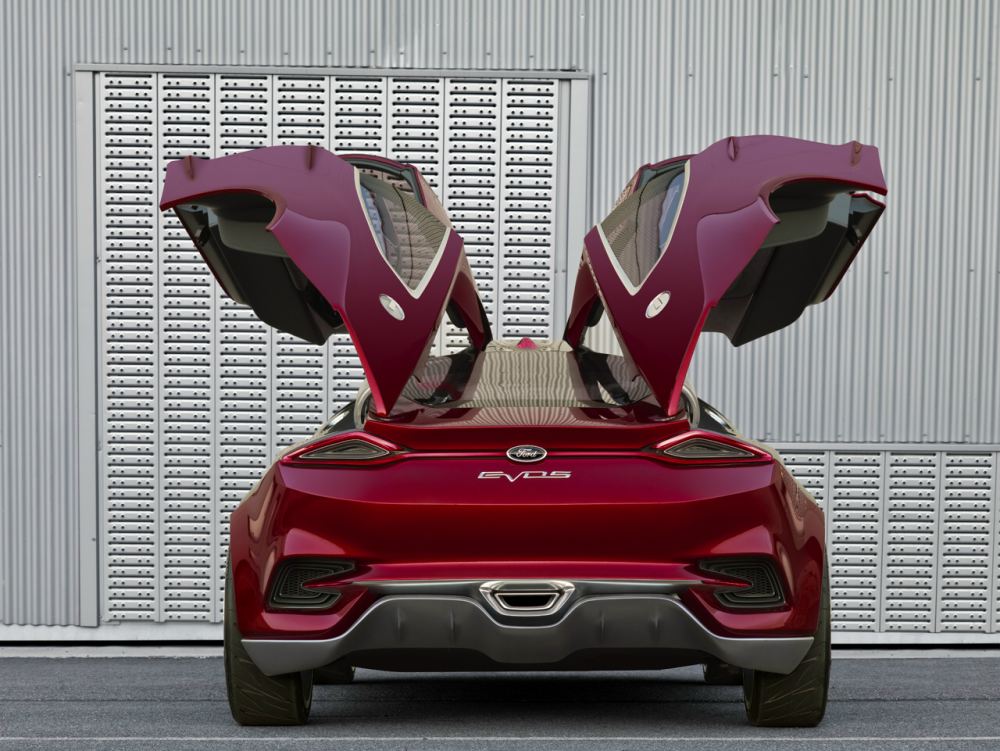 Ford has released the official information and pictures of the Evos Concept. The new Concept will make its show debut at the Frankfurt Motor Show 2011 in September. Ford is calling the Evos Concept the representative of its new design language, a shape on which more less all future Fords will revolve around for some time to come.

“We wanted the Ford Evos Concept to give a clear message about where Ford design is heading – shaping vehicles that are fun to drive, have a strong premium visual appeal, and above all, are stunningly beautiful,” said J Mays, group vice president, Design and chief creative officer.

With the length of a typical C-segment car, but with width of a higher segment car, the Ford Evos Concept has a powerful, sporting stance. The forward position of the cowl, the strongly rounded front screen and the A-pillars makes it look like a classic GT car, but with a very contemporary feel. The concept’s spectacular hinged gullwing-style doors, both front and rear, provide access to the four-seat cabin. The concept car measures 4.50m long, 1.97m wide and 1.36m high, with a wheelbase of 2.74m.

The Ford Evos Concept has a lithium-ion plug-in hybrid (PHEV) powertrain, which offers an overall driving range of more than 500 miles (800 kilometres) using the battery and engine – more than any other plug-in or extended-range electric vehicle.

Apart from the next-gen powertrain the Evos boasts of a brand new concept in car communication technologies. The concept’s technology experience embraces a new generation of driver interaction and awareness currently under development in the Ford Research and Innovation laboratories. Seamless connectivity between the vehicle and the driver’s ‘personal cloud’ of information is at the heart of the vision for its capabilities.

With information from the cloud, the vehicle can provide the same connected lifestyle the driver experiences at home or office. The car knows the driver, and automatically adapts handling, steering, air-conditioning, route maps and engine controls to deliver an exceptionally dynamic driving experience. The car can also perform chores such as pre-cooling the cabin before the driver’s arrival, shut the garage door and turn off the lights, and several other such tasks. The car is targeted to absorb data from the driver’s lifestyle and use advanced connectivity to utilize the data in making lie simpler for him.

Do you find the Evos concept interesting? Do let us know your views.