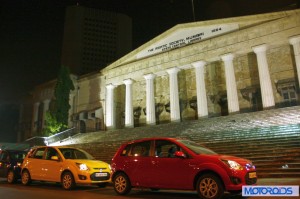 Ford India on Friday said it intends to recall as many as 1,66,021 vehicles, comprising of Ford’s best selling hatchback Figo and popular Classic sedan. The vehicles covered under recall will undergo rectifying of problems related to power steering and rear suspension. The recall will impact 1,09,469 units  of Figo and  22,453 units of Classic models, manufactured between January 2010 and June 2012.

Ford India said that they are extending its existing voluntary field service action and will recall the remaining batches of the Figo and Classic to inspect them for potential Power steering hose and Rear Twist beam problems.

Ford India also said that 1,09,469 units of Ford Figo and 22,453 units of Ford Classic produced and sold from January 2011 till June 2012 will need to be inspected but will not necessarily need part replacements with respect to the Rear twist beam.

With respect to the Power steering hose, 30,681 units of Ford Figo and 3,418 units of Ford Classic produced and sold in India between January and August 2010 and between March and November 2011 will be inspected and then replaced.

The company also stated that “this initiative is taken to ensure safety and satisfaction of our customers by inspecting and replacing the aforementioned parts”. This recall will be carried through the chain of authorized Ford dealerships.

No accidents or injuries related to the power steering hose or rear twist beam have been reported, the American auto giant added.

This is the biggest vehicle recall since industry body SIAM had introduced a voluntary recall in July last year.

Call your nearest Ford India dealer to know if your Classic/Figo falls into this recall drive and warrants an inspection.