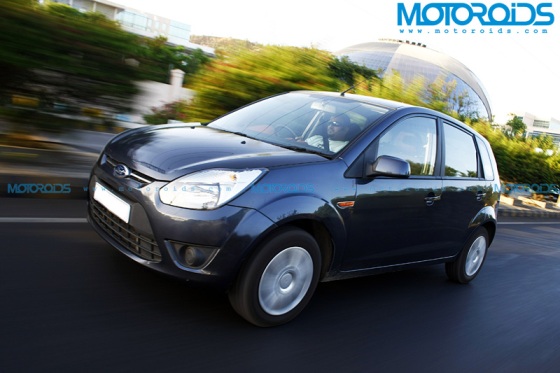 Ford India, for the first time has started exports. The company today shipped 1200 Figos to South Africa. Michael Boneham, president and managing director of Ford India, flagged off the first shipment of Ford India manufactured Ford Figos bound for South Africa.
Speaking about Ford India’s latest passenger car export order, Boneham said, “In addition to being a sales chart topper, the Ford Figo is the first small car to be produced and exported by Ford India and today’s consignment of 1,200 Figos to South Africa is a new exciting development for us.” “Given the rising demand worldwide for compact vehicles, we plan to accelerate our export strategy to not only enhance our business growth but also to further embellish India’s reputation as a major regional auto manufacturing hub” he added.
Boneham further added, “Just as the Figo has taken the Indian market by storm, we are confident that it will have a similar impact in South Africa and we hope to export 5,000 vehicles to the country by the end of the year.”
Ford India will export the 1.4L petrol and diesel Figo variants to Ford Motor Company of Southern Africa who plan to deliver the vehicles to their network of 123 dealerships by mid July.
Since its debut in March, the Ford Figo has generated more than 24,000 purchase orders for Ford India. In the month of June, Ford India’s sales grew by 267 percent. The company sold a total of 7,269 units, compared to 1,982 units in June 2009. The success was driven mainly by the popularity of the Figo.
The Figo shipment further extends an export relationship between Ford India and Ford in South Africa. In addition to diesel powertrains, the Ford India manufactured Ford Fiesta continues to be exported to South Africa. In June this year, Ford India also began exporting petrol engines to Thailand.