Ford’s plans to launch a small car in India haven’t really been a secret. Little disguised Fords have been posing for the paparazzi on Indian roads for months. So finally Ford decided to lay all the speculation to rest and revealed the ‘Figo’, which means ‘cool’ in Italian. The Figo was revealed to the press by none other than Alan Mullaly, Ford’s Global Head. 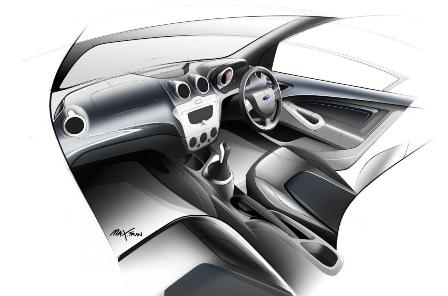 The Figo is based on the previous generation European Fiesta hatch and has the same wheelbase as the Fiesta saloon, but it has been tastefully ‘Kineticized’. It gets the Ford family’s familiar swept-back headlamps and the trademark inverted air-dam. From the sides and the rear it resembles the Fusion, which Ford has tried hard to spice up with reasonable success. But we are still not sure whether it will look comfortable around modern rivals like the Honda Jazz, Fiat Grande Punto and Maruti-Suzuki Ritz. The interiors haven’t been released yet but from the spy pics that we have seen, they look pretty similar to the Fiesta’s.

The Figo will be available with a choice of two engines, the excellent, 1.4 litre Duratorq from the Fiesta and all new 1.2 litre Duratec Petrol which will be a smaller version of the 1.4 and 1.6 litre units from the Fiesta. Both the engines will fit neatly into the excise duty benefit bracket which means that it will be cheap. We expect it to be priced around the 4.5 lakh to 6 lakh rupees (on-road) for the petrol and 5 lakh to 6.5 lakh for the diesel. Expect the car to be in showrooms in March 2010.