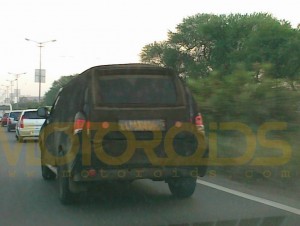 We had told you the complete story about the Force Motors new SUV which is doing the rounds round Pune these days. Now, one of our eagle eyed readers, Yash Somaiya has managed to catch the vehicle again, although still under heavy disguise. Thanks to Yash for the pictures. You can read the full story about the new Force Motors SUV, which the company is developing with Guandong Foday of China, after having a look at the fresh pictures

Remember the Force Motors SUV that was spotted a little more than month ago? (CLICK FOR A DETAILED REPORT) Like all of you, even we were surprised on seeing Force Motors having developed such a huge SUV without any talk of it emerging out of the automotive circles. We did our research and deduced that this SUV was a Chinese machine which sells as Guangdong Foday Explorer II in the Dragon Land.

Now, some fresh spy pictures of the new SUV have emerged on AutocarIndia forums. The new pictures only substantiate our claim that the vehicle in question has a strong relation with the made in China Guadong Foday Explorer SUV.

However, some of our readers along with very talented and successful blogger friends were not convinced. This made us put our thinking cap back on and we ventured to find the truth. After a bit of research, we realized that we were correct in our findings. We have irrefutable evidence of a Force Motors – Guangdong Foday association with us now, through which we have found out these facts about the SUV on test.

1.    This all started in March 2009 when top representatives from Force Motors R & D team visited Guangdong Foday for talks about using the Chinese carmakers CKDs in India. The talks about this deal were on since 2008

2.    The top bosses at the two companies (including Mr. Abhay Firodia from Force Motors), along with a team of engineers had met in September 2008, for negotiations. Later, two engineers from Foday came to India for a feasibility study. This feasibility study was to check whether the Explorer III body could be matched with a chassis which was to be developed in-house by Force Motors in India.

3.    The engineers found out that this match can be made, with a few changes.

4.    Following this study, an agreement was signed between Force Motors and Guangdong Foday. The India company agreed to order two Chinese SUVs in India for study.

5.    Force Motors projected a rather optimistic 800 (!!??) units a month. We think even half that number will be an achievement for Force Motors.

So, in essence, the SUV that you see in pictures here is a love child of Force Motors and Guangdong Foday. The Chassis will be made in India by Force Motors, while the rest of the components will be brought to India via the CKD route. We have dissected this SUV in its entirety earlier as well, click here for all the engine specs (power, torque), details and images.

Page 1 of 2. Go to next page for the latest development on the launch plan of the SUV

We had, however, expected the SUV to take some time in development, and hit the roads only in 2011. Force Motors Chairman Abhay N Firodia, in an interview to Economic Times has somewhat hinted that the SUV may hit the showrooms much earlier than anticipated. Mr Firodia said “We will launch a Sports utility vehicle (SUV) sometime this year. We do not have a product in this segment, but we have developed a new platform which will allow us to launch a stylish new vehicle in a segment which is very popular. We are in the rural market with the Trax, which is rural multi-utility vehicle used as a rural taxi in those states that allow it. The SUV is a completely different segment from the Trax, though,”

Force Motors has its manufacturing plants in Akurdi near Pune and Pithampur, near Indore, in Madhya Pradesh, where its equal JV, MAN Nutzfahrzeuge is also located.