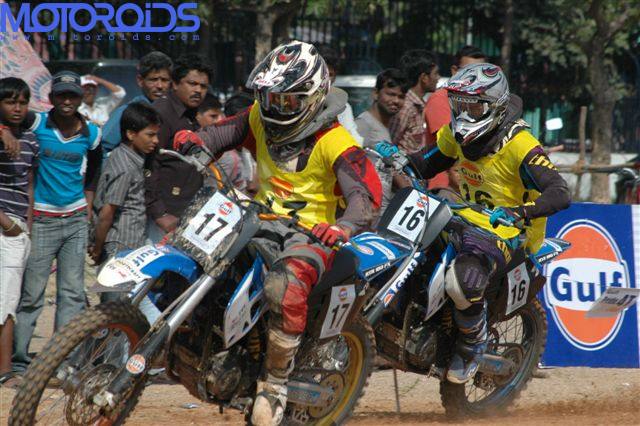 C.S. Santosh and Pradeep H.K of TVS Racing team were  the star performers in the first round of the Gulf Cup Dirt Track racing in Hyderabad on Sunday.
The event was sponsored by Gulf Oil Corporation and organized by Sportscraft Mumbai in association with Racecraft, Hyderabad.
Motorsport fans that turned up at the N.T.R. Stadium Ground, Domalguda – Hyderabad, watched some of the country’s leading riders go through the motions in high speed dirt track racing.
Pradeep H.K. in the Race 1 of Indian Expert Class, Group A –  Foreign M’cycles Upto 250cc  – 2 & 4 Stroke took the lead and was followed by C.S Santosh, K. P Arvind in second and third position respectively.
During Race -2,  C.S Santosh was always under pressure as he went around the specially-laid out serpentine course, but to his credit he did well to overcome a strong challenge from his TVS team and city mates H K Pradeep &  K P Arvind who were in second and third positions respectively .
Dirt track racing is all about riding at high speed on a specially-laid out winding track, which is mostly slushy and gravel-laden. The rider has to negotiate serpentine bends while doing several laps and is timed to the hundredth of a second.
The sandy surface made riding extremely dicey. The seasoned riders too had a tough time staying astride on their bikes, and it required a good degree of skill and stamina to come good.
Much was anticipated in this opening round and none disappointed as they went through the motions on a specially-laid out course at high speeds, their superbly prepared bike raising a dust storm all over.

The course laid out by organizers Sportscraft was really tough. In addition to the sharp bends there was also loose gravel and water-logged areas which made riding a dicey proposition, but all riders displayed excellent skills to come through this test of man and machine in flaying colours.
However the competition was real tough in Indian Expert Class, Group – B, Motorcycles Upto 260cc  – 2 & 4 Stroke – Though the riders of Team TVS Racing ruled the Class in Race 1 & Race 2.
In Race- 1, it  was C.S Santosh, Pradeep H.K & Nataraj R in first second & third Position respectively.
In Race – 2,  K.P Arvind raced his way to the first position displacing C. S Santosh to second and Pradeep H.K to third position.
Girish K.C of Kerela was the undisputed King in the  Private Expert Class,Group B – Motorcycles Upto 260cc  – 2 & 4 Stroke winning both the races giving tough competition to Murthy R and Firoz Khan in Race 1 who were second & third respectively while as in Race 2,  A. Anand and Murthy R were second & third respectively
Jatin Jain of Nagpur & Vineet Kurup of Nashik took lead in the Private Expert Class,Group A – Foreign M’cycles Upto 250cc – 2 & 4 Stroke in Race 1 & Race 2 respectively
The local heroes were Gaurav Naidu Javed Khan and K.Yasaswi
In Local Class – Group C – Motorcycles  Upto 165cc, 4 Stroke Javed Khan stole the show taking the first position followed by K.Yasaswi and Gaurav Naidu in second and third position,
While in Local Class –  Group C – Motorcycles Upto 165cc , 2 Stroke Gaurav Naidu showed his supremacy to take the lead and was followed by K.Yasaswi, Javed Khan in second and third position respectively
Novice Rider V.S Naresh of TVS Racing Team showed a lot of promise winning two of the three Novice classes

Despite the long programme of 15 races and Practice session happening in the morning, the event went off with precision timing and it was not surprising that it was applauded not only by the participants, but also by spectators.
In sum, it was a perfect outing for both participants and spectators. Sportscraft’s meticulousness ensured there was nothing to complain about even though they had to change the last minute program of Practice, and venue of briefing and scrutiny due to political unrest on Saturday 4th December near NTR stadium.
While the goodly crowd that turned up was appreciative of the event, the riders too were all praise and thanked Gulf Oil for giving motorcycle riders an opportunity to parade their skills in a safe environment and expressed hope that the event will be held next year too.