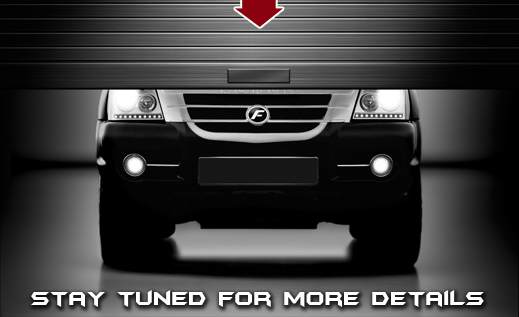 Update 9: Force Motors plant at Pithampur  in MP has a capacity to manufacture 12,000 units of the Force One annually. However, the production can be raised to 20,000 units a year if need be. The plant boasts of a brand new body and paint shop. What you see below is a Motoroids’ exclusive picture of the Force One SUV. Force Motors only partially revealed the SUV to the press, stating that the vehicle will be fully revealed in the next three weeks.

The 2.2-liter, 140PS, 350 Nm, Daimler diesel engine used for the SUV will be produced locally at the company’s Pithamput plant under license from Daimler with good level of localization. Lotus from UK helped in sorting the driving dynamics of the car. Companies like Bosch and Lumax provide components for the Force One.

Here’s the exclusive pic of the Force One.

Update 8: Force Motors Plans to sell 4000 unis of Force One SUV in the first year. The company will also launch an APV later, which would be bigger than the Innova in size. The MPV will be highly localized and will ambitiously target good volumes in the Innova / Xylo bracket. One year after the MPV a new, more premium SUV will be revealed.

Update 7: The company has officially said that the new SUV will be launched in 30 to 40 days, although no specific dates have been declared.

Update 6: Although the price of Force One has not been revealed in the sneak preview press conference, some of the slides in the presentation suggest that the SUV will be positioned optimistically in the league of ‘mid-range’ SUVs such as the Ford Endeavour and the CR-V. The company sees the SUV market in India divided in three segments, lower segments comprising of the Safari and the Scorpio, Mid range with CR-V and Endeavour and the premium range comprising the Audis, Mercs and the Beemers of the world. Force Motors (by the positioning of the product on the ppt slide) most likely want to position it close to Endeavour.

Update 5: The company plans to keep its focus strongly on engineering and reliability with the new product. The company wasn;t in a haste to launch the product and all the engineering components, including engine, Chassis and gearbox were developed with great care and thoroughly tested before being signed of production.

Update 4: Force Motors have appointed Lintas as their media agency, which will help them with a 360 degree strategy on marketing the product, covering print, electronic and digital media. As per the company officials, special attention will be given to digital media.

Update 3: The company has unveiled a new logo for itself, as well as the new SUV. Find below the pictures of both

Update 2: Complany claimed features for the Force One include

3. Best in class performance and reliability

Update1: Force Motors SUV to be named Force One

As we told you yesterday, Force Motors is giving a sneak preview of its upcoming SUV to the auto media. You can read our most recent report on the new SUV by clicking here.

As you would expect we are there at the preview conference, ready to bring out whatever the company reveals about the car, before anyone else. As of now, the conference is just about to begin, and we are all set with our cameras and communiation equipment to let you know everything about the new car. Stay tuned.

Speakers on the dias now…