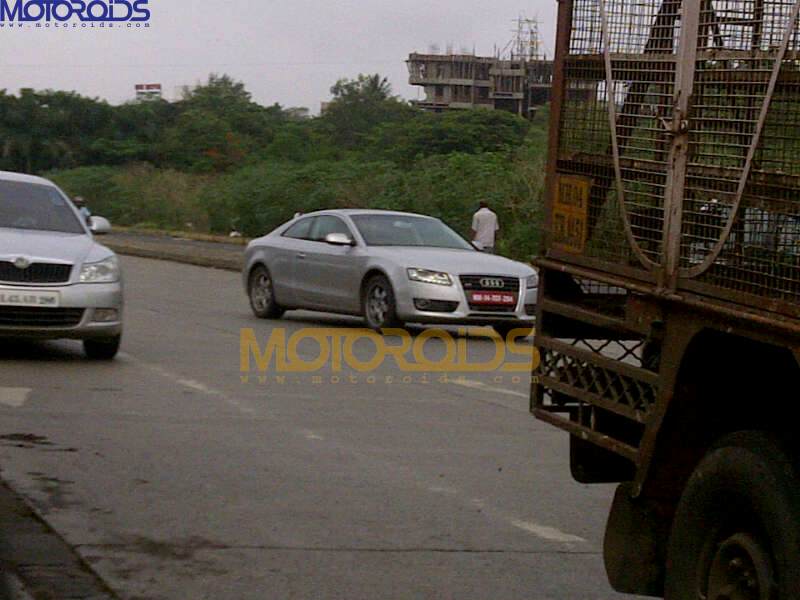 Audi seems to be planning to launch its A5 Coupe in India. Regular readers would recollect that the company very recently launched the high performance version of the car, the RS5 Coupe. In a Motoroids exclusive, Shashank Ramugade, our in-house contributor has managed to click the first ever spy pictures of the A5 in India. The car was caught testing in Mumbai.

The A5 Coupe forms the basis of as many as seven variants based on the platform. These include the base A5 Coupe, A5 Sportback (4-door), A5 Cabriolet, S5 Coupe, S5 Sportback, S5 Cabriolet, and RS5 Coupe.
The A5 is the most basic and affordable of these seven, and seems like Audi is keen on offering a new variation to the premium car audience with the new A5.

The A5 combines four-seat practicality and 455-litre luggage capacity with a Coupe’s sporty appearance. The car features a driver-oriented sports chassis. The Side air dams, the shape of the grille and the new design of the alloy wheels seperates the A5 from the more expensive and aggressive S5 and RS5 variants.

The A5 features the Audi MLP or the Modular Longitudinal Platform which lets the powertrain being located behind the front axle – in an effort to achieve a more even weight distribution (52:48)[1] between the front and rear wheels.

The A5 in India will most likely be powered initially by a 2.0-liter TDI turbo diesel and a 2.0-liter TFSI petrol mill. The power and torque output from the diesel mill is 170PS and 350Nm respectively. For the petrol powerplant, the rated peak power is 180PS, while peak torque is 320Nm. Both the engines will be mated to Audi’s Multitronic transmission. A 6-speed manual transmission option is also available for the car internationally.

For the power hungry a 3.2-litre FSI petrol unit with 265PS and330Nm may be offered in the top of the line variant of the car. The engine will be mated with Audi’s ultra quick Tiptronic transmission and will come equipped with the fabled Quattro all wheel drive system.

There is the option of a 3.0-liter V6 TDI which may also get its place under the A5’s hood. With 240PS of power and 500Nm of monstrous torque, the engine would make the A5 a real hoot to drive.

While there has been no official word from Audi, having seen the car in action, we may expect it to hit out streets by the end of 2011. Price will range from rs 32 lakh to 40 lakh based on variants. More official pictures of the car posted below.
Stay tuned for more updates…