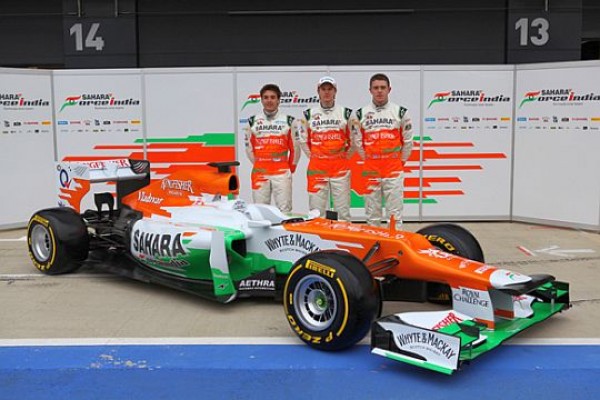 Sahara Force India looks ahead to the third round of the 2012 season in Shanghai, China. To download the full PDF preview or the media schedule for the weekend, please click on the links below.

After two races the 2012 season appears to have all the ingredients needed to serve up a spectacular year of racing. Already the fans have enjoyed two thrilling races and the intensity of the competition across the grid is sure to capture everybody’s attention.I said last year that the competition in the midfield was close, but this year it seems to be even more so with the majority of the grid capable of fighting for points. It’s a good situation for Formula One, but it also means points are harder to come by. It’s encouraging that we have scored points in both races and that will be our aim once again in China.I have to congratulate Paul and Nico on their excellent drives in Malaysia. They are only in their second full seasons of Formula One, but they both showed their maturity in the difficult conditions. At times Paul was one of the fastest cars on the circuit, excelling in the conditions, and it’s clear that we can expect another strong season from him. I was also delighted to see Nico pick up his first points with us after such a strong showing.In terms of car development, the factory at Silverstone continues to work at full capacity to improve our performance. The first two races have given us a great deal of information to work with and we will put it to good use in the coming races.

Following points finishes in the first couple of races, Paul Di Resta sets his sights on more of the same in Shanghai this weekend.

Paul, you must be pretty happy with your start to the season…

I think the whole team is pleased to have nine points on the board after two races and it was important that we picked up some good points on such an unpredictable day in Malaysia. We’ve seen how close all the teams are this year and getting points isn’t easy, so it feels good to start as we mean to continue.

Do you enjoy visiting China and experiencing the different culture?

China is a great place and Shanghai is a city I enjoy visiting. It’s such a big place, there is a lot to see and I enjoy it even more each time I go there.

Tell us about the track…

It has some unusual features. Turn one is very long and feels like it goes on forever. The key to getting it right is how much entry speed you can carry into the corner. You also have to look out for one of the biggest bumps of the year at the corner entry, which makes it difficult.

And what about the overtaking opportunities?

The best chance is turn one or into the very tight hairpin of turn 14, which widens on the entry and makes it difficult to defend. We also saw the effectiveness of DRS last year, which helped produce some good racing and it should be the same this year.

Nico Hulkenberg looks ahead to racing in Shanghai following his points finish in Malaysia.

Nico, after the disappointment of Melbourne, you finally got some racing miles under your belt in Sepang…

Yes, I’m happy with the race we had in Malaysia, which was basically the first proper race I have done since the end of 2010. It wasn’t an easy race and I was never in any clean air, but it was good to pick up a couple of points – my first points for the team.

Did you learn much about the car given that the conditions were so changeable in Sepang?

You always learn something and a race distance is always valuable for your knowledge of the car, even racing in the wet. The most difficult part of the race was just after the restart when I struggled for balance on the wets and intermediates, but when I switched to slicks the performance was pretty good.

Does the team have a better idea of the pecking order yet?

We’re only at the start of the season – we’ve only had two race weekends, so we still need to wait and see. Because the midfield is so compact nobody can afford to relax. We all need to push hard to improve performance and with 18 races still to go there’s plenty of time to do that.

What are your thoughts ahead of this weekend’s race in China?

It’s not my favourite race of the year, but they’ve done a good job to build a really impressive facility and it’s a fun track to drive. It’s difficult to predict how well we will do there, but given how close the grid is at the moment I think it should be a good show for everyone who is watching.