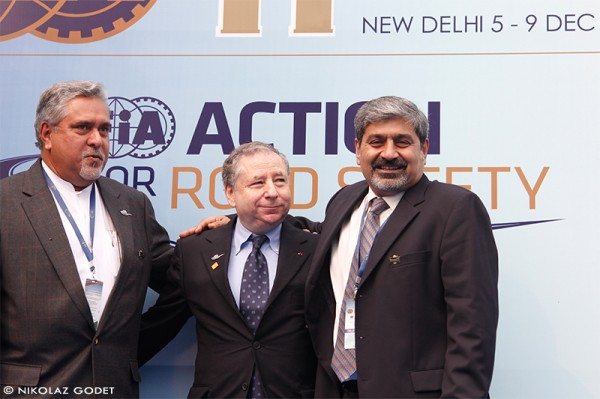 After a second extended term of being FMSCI President, Vicky Chandhok today confirmed that he will not be standing for re-election for the upcoming year. Chandhok, along with the Jaypee Group and other FMSCI council members, played a key role in bringing Formula One to India and has helped move Indian motorsport forward in his recent 4 year term.

After an earlier stint of 3 years at the helm of the Federation from 2005 to 2007, Chandhok was elected to the Presidency again in 2010. The last 4 years have seen a big boost in Indian motorsport, not just with the Formula One Indian Grand Prix but also with domestic motorsport in general. Auto manufacturer support has increased with involvement in car and bike championships as well as the Indian National Rally Championship. Under his aegis, the first ever Indian National Times Speed Distance Rally Championship was also launched.

Mr. Chandhok said that it was a hard and somewhat emotional decision not to stand for re-election. He said, “This is a difficult decision for me but after being President for 7 out of the last 9 years, and living and breathing Indian motorsport on a daily basis, it is time to pass the baton on. The federation has seen many wins over the past few years, including, most notably Formula 1 coming to India as well as the Asian Road Racing Championship for Bikes. There have been so many positive changes to Indian motorsport with the introduction of new championships, and I am glad to have played a pivotal role in making it happen. The first ever FMSCI Automobile Conclave has helped us in bringing more manufacturers into our various championships. From an international perspective, India has a much larger presence in world motorsport with 14 people joining international commissions and I’m glad that I have played a part in building these international relations with the FIA, FIM and CIK.”

The last 4 years have seen significant developments in the Indian motorsport arena. Karting and single-seater racing has given young Indian drivers the perfect platform to hone their skills before going to race internationally. The JK Tyre National Karting Championship continues to flourish and the introduction of the JK Racing India Series, MRF 16000 and MRF Challenge 2013 has helped prepare young drivers to face the challenges of international competition. Saloon car racing in India has established its own niche with the introduction of the Volkswagen Polo R Cup and the Toyota Etios Trophy. Rallying in India has recovered after a couple of difficult years and now has increased manufacture presence from car giants Volkswagen, Mahindra and Maruti.

Mr Chandhok added, “Young drivers now have ample platforms to chart out their motorsport career starting from karting to F3 style cars. Rallying, a discipline where I personally spent many years competing, has now stabilised over the last 12 months. It has also been very heartening to see the support that organisers, promoters and competitors have extended to me personally, and the federation especially over the past couple of months. I have had a very passionate team of people to work with and none of our achievements would have been possible without the determination and hard work of the entire team.

I am very grateful for the opportunity that I was given to improve Indian motorsport and I am confident that we can look forward to more successes in the future. There is a plenty of work to be done in supporting the Jaypee Group and Formula One Management, as well as the vehicle manufacturers to improve the sport in India. I will of course continue to be a member of the FMSCI managing council and look forward to lending my support to the new President and his team.”