Fire causes a vast damage to property and as well as life. Even with all the precautions taken to avoid fire or atleast douse it as soon as possible, fire outbreaks are common. A major fire broke out recently at a Jaguar Land Rover dealership located in Sudbury, Massachusetts. Around 20 vehicles, both new and used, were affected by the fire. 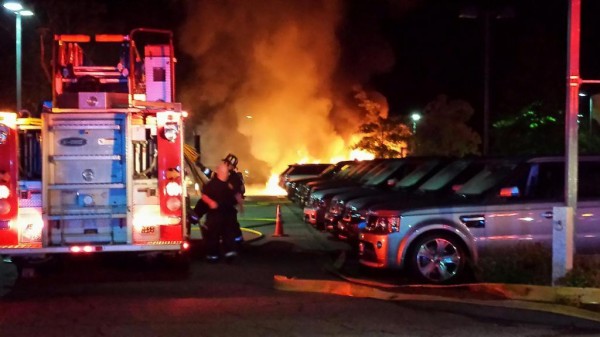 At 1:07 AM, a passerby immediately reported the fire to the Sudbury fire department after seeing the flames at the Herb Chambers facility at 83 Boston Post Road where the Jaguar Land Rover dealership is located. The causes are still unknown but investigators will be checking out CCTV footage from a nearby dealership to find out from where the fire started.

According to Sudbury Fire Chief Williams Milles, “some of the cars were so badly damaged that it’s difficult to tell just what kind of cars they are” and one of the reasons why the fire expanded so quickly is because the gasoline tanks of several cars exploded. It is believed the fire started at the back where usually vehicles are parked when undergoing repairs.

Apart from the 20 cars, no other damages to life and property were reported.