It appears like supercars all around the world are having a tough time. Yesterday, we reported a Lamborghini Gallardo splitting in to two after meeting with an accident at 150km/h. Earlier today, reports of a Mercedes SLS AMG falling off a ship during delivery surfaced.

Latest piece of news comes from Australia, where a Italian Stallion, Ferrari Scuderia, met with an accident on Mitchell Freeway at Padbury. Herald Sun reported that the driver lost control and slid onto the verge on the side of the road, ending close to a large tree. 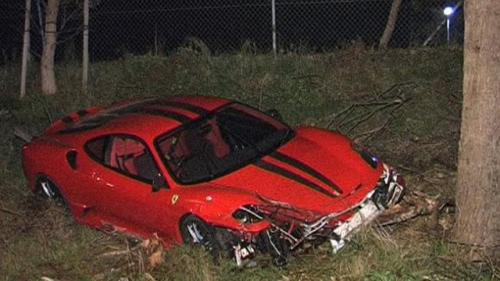 The report also says the man behind the wheel wasn’t injured. However, the over half-a-million Australian dollars worth a car suffered massive damages in the accident. The front bumper and a section to the bonnet was ripped off. There also appears to be some damage to the underneath of the car. It is yet to be investigated whether the driver of the Ferrari was overspeeding or not.

Car manufacturers install slew of technological equipments to reduce the chances of any mishaps. But, there is only so much they can do. We believe all manufacturers can do is install a sticker on the dashboard which reads – “With Great Power, Comes Great Responsibility”.