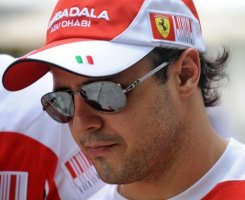 It was a horrendous start to the weekend for Felipe Massa as he failed to make it past Q1 of the qualifying session. That meant that his Ferrari would start amongst the back markers at the end of the grid due to a poor qualifying strategy by Ferrari. The team in the past couple of seasons has got their rain strategies wrong and Saturday was yet another gaffe after Alonso and Massa attempted a late qualifying dash. The team gambled on the track conditions to become drier, but with the rain clouds staying put, they only get wetter!

Considering all of that the race proved to be a rather successful one for Felipe. Massa ended up a respectable seventh at the chequered flag having made up a host of positions along the course of the race.

The way he made his way past Jenson button was my favourite part. Felipe and his Ferrari certainly proved to everyone that they are in the Championship hunt. A brilliant race from the back end to the front runners proves that Felipe can still drive the car and how. Felipe probably would have caught up a few more places had the expected rain arrived.

As a result of finishing seventh, Felipe now leads the driver’s championship with 39 points leaving him two points ahead of both his teammate Alonso and the Red Bull of Sebastian Vettel.

The championship race certainly seems to be heating up with both the Ferrari’s being strong contenders for the title closely followed by Red Bull and McLaren. The Mercedes of Nico Rosberg is proving to be a surprise package at the start of this season. The title contenders are certainly many but Felipe heads the pack and it now remains to be seen whether he can hold on to this slender advantage that he has and go on to increase his lead over the course of the next few races.

Everyone is expecting this season to be very closely contested and so far that is exactly what is happening. Although, in the coming races especially in the European leg, I think that the Ferrari’s will come good and Massa may just have the advantage after leading the pack early in the season.

The coming races will give Felipe the chance to prove his mettle and his ability to dominate proceedings on track. The other contest that I look forward to at each race is the competition amongst both the Ferrari drivers. As the season heats up, one certainly expects to see some fireworks between Massa and his team mate. Hopefully, Felipe will be able to get a few wins under his belt and win the championship this time round.

Go back to F1 2010 Sepang, Malaysia – The complete coverage!