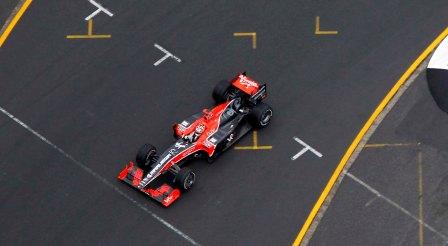 The Virgin Racing team finally saw the chequered flag this weekend at the Malaysian Grand Prix. After a torrid start to the season, this new team finally managed to finish a race.

With all that they have dealt with at the start of the season it is definitely a commendable performance from the Virgin team. While it was disheartening to see Timo Glock retire once again, the team was jubilant to see rookie Lucas di Grassi take the chequered flag and finish Virgin’s first F1 GP ever.

Remember that this is a team that had suffered with hydraulic problems from the start of the season. Add to that the fact that it was discovered that the team has a fuel tank problem and the car may not get to the finish line at the Malaysian and Chinese Grand Prix’s at optimum speed was another blow for the Virgin team.

Despite all of these problems; they seemed to not think about their past but just concentrate on finishing the race at Sepang. Finish, they did indeed with a strong performance by Lucas di Grassi who was understandably happy with the result. After all the young Russian driver made up a few places during the first lap itself and held on for a strong drive to the chequered flag.

This is Lucas di Grassi’s first season in Formula One and the Malaysian Grand Prix is the first Grand Prix that the young driver has seen the chequered flag in. We can definitely expect to see more from the promising youngster.

Timo Glock will certainly be looking to get his car to the finish line at the next race to register his first finish for the F1 2010 season. It would really be a wonderful sight to see both the Virgin racing cars see the chequered flag. It was a mistake on his part that cost him dearly at Sepang and he hopes to do better next time round and I am sure he certainly will.

Now Virgin would be looking to consolidate this finish and victory of sorts; by putting up a strong show at the Chinese Grand Prix. That again will be easier said than done because the fuel tank problems will persist as they cannot get a new chassis until the Spanish Grand Prix.

Things slowly but surely seem to be looking up for the Virgin Racing team. Slow and steady does win the race and we can definitely expect to see a lot more of Virgin in the races to come as they head into the Chinese Grand Prix with renewed confidence and certainly a much needed boost. What I am really interested in seeing is how they will compete with the new teams once the new chassis is in place from the Spanish Grand Prix.

While their immediate future might look a little bleak, for now they can sit back and enjoy the fact that they have finally managed to complete the race and that too with all the teething problems that they are currently facing. A commendable performance indeed!

Go back to F1 2010 Sepang, Malaysia – The complete coverage!