Where there’s smoke there usually is a flame. Recently, an FB Mondial HPS 125 was spotted near the ARAI facility in Pune. Sporting a red licence plate, the motorcycle was perhaps going through a homologation process before its launch. We reached out to the Italian bike maker through one of our social media channels to ascertain if they indeed are planning to enter the Indian market. While they did not reveal if they will be setting up a manufacturing facility or tie-up with an Indian company, they did specify that they’re working on a distribution model, which should be in place within the next 2-3 months. 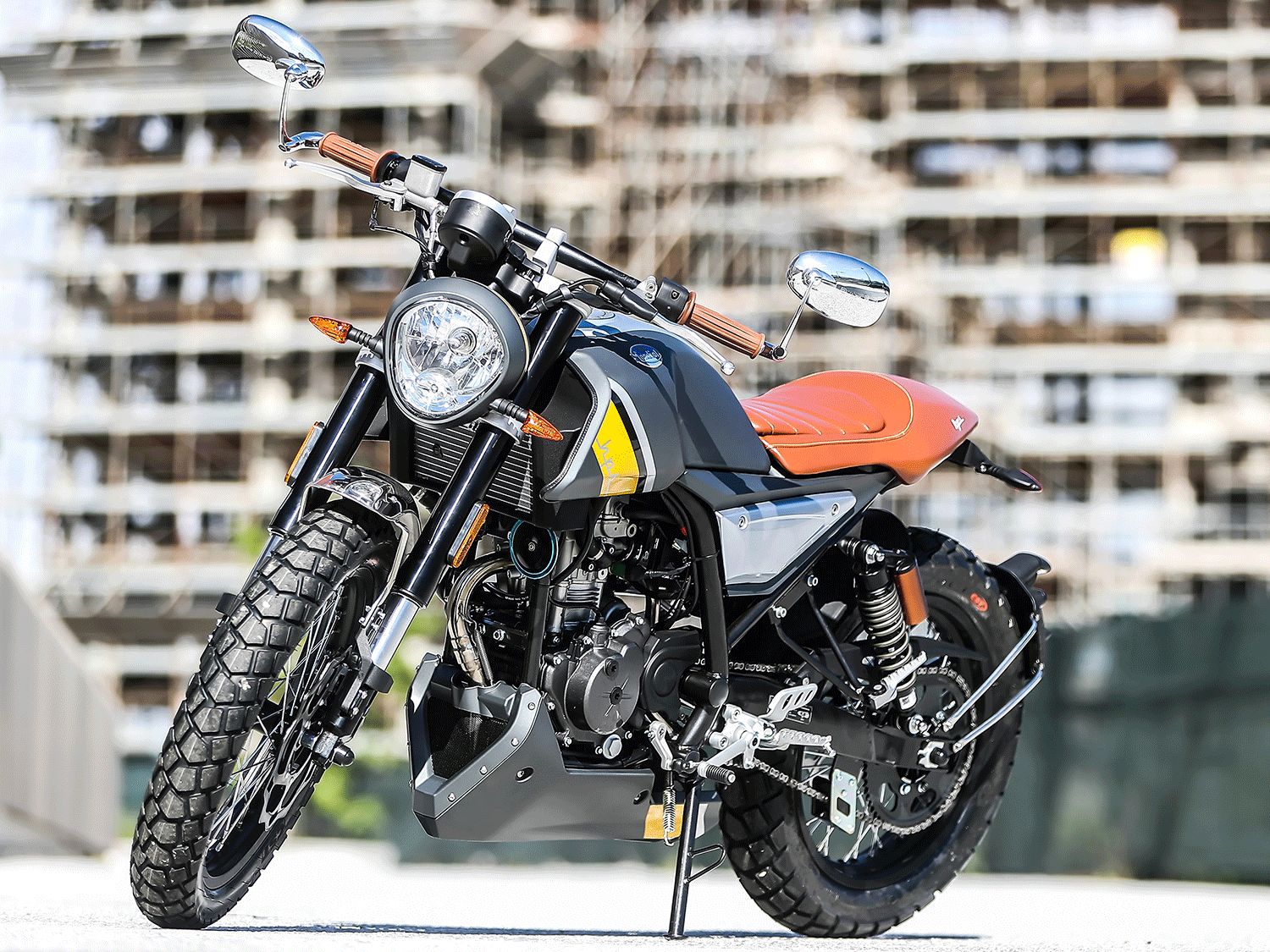 For the uninitiated, FB Mondial was founded in 1929, in Milan, Italy and were known for dominating Motorcycle World Championships held between 1949 and 1957. The firm produced some of the most advanced and successful Grand Prix road racers of the time, winning five rider and an equal number of manufacturer World Championships within that short period. Such was their expertise, in the year 1957, the legendary Soichiro Honda approached Mondial owner Count Boselli for purchase of a Mondial race bike, with which the firm had just won the 125 cc and 250 cc world titles. Count Boselli gave Mr. Honda a racing Mondial, which was used by Honda as a benchmark in order to compete on a world-scale. As a result, an original Mondial 125 cc race bike is, even now, the first bike on display when one enters Honda’s Motegi Collection Hall. 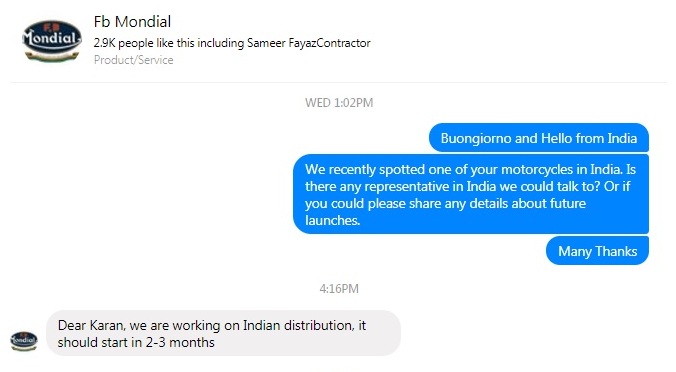 Even when they were hugely successful, at the end of the 1957 Grand Prix season, Mondial followed other biggies like Gilera, Moto Guzzi and MV Agusta to pull out of Grand Prix racing citing increasing costs and dwindling sales. After withdrawing from the racing scene, popularity declined and the last pure Mondial left the factory in 1960. Post that, the bike maker continued for a while, purchasing engines from proprietary makers. In this hybrid form, motorcycles with Mondial frames and ancillary parts, but non-Mondial engines, were produced by the factory for the next 19 years. However, Mondial stopped production in their entirety in 1979, until their rebirth nearly twenty years later. In 1999, the rights to Mondial were purchased by newspaper tycoon Roberto Ziletti. However, in 2014, owner of the Mondial brand and decedent of the original founders, along with Cesare Galli, holder of Pelpi international Italy, started to lay the foundation to revive the company. 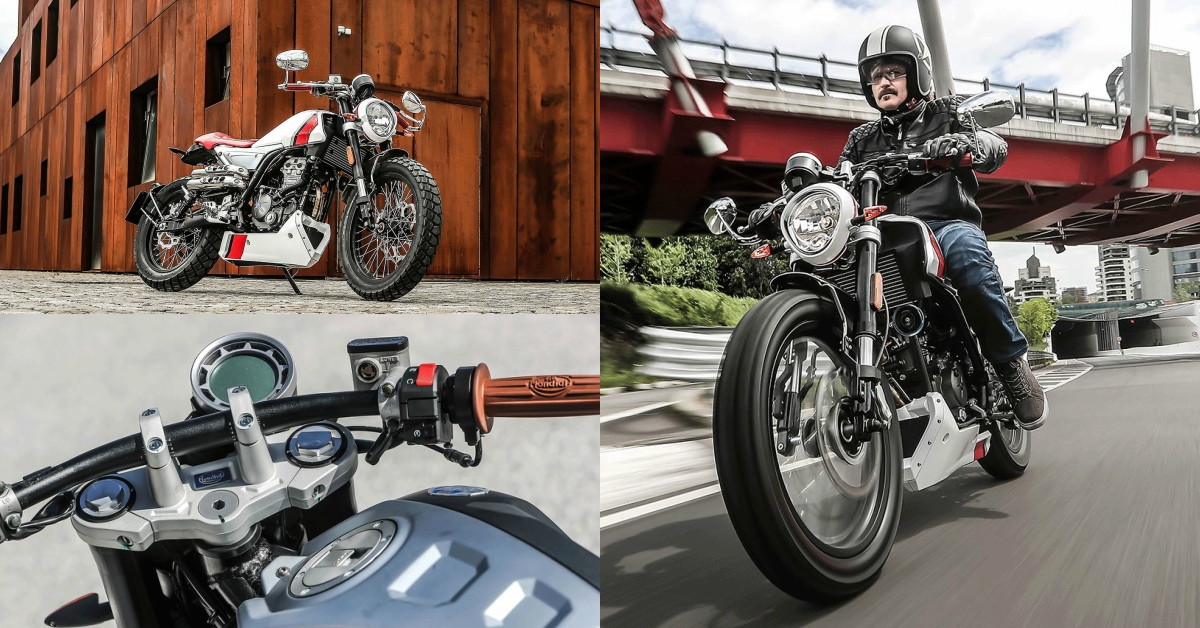 Through that first year and all of 2015, initial design sketches evolved into prototypes then eventually became reality in the form of the HPS 125 and HPS 250 for FB Mondial. The HPS’ design is a fusion of the classic FB Mondial character, with modern technology, and is built by Piaggio in China, who also produce vehicles for well known Italian brands such as Aprilla and Vespa. The new Mondials are powered by Piaggio engines which are bolted on to the bike maker’s own higher specification design of chassis and styling. The bike maker currently offers four variants – a traditionally styled ‘cafe-racer’ HPS, powered by 125cc and 250cc engines, as well as the off-road styled SMT and SMX models. 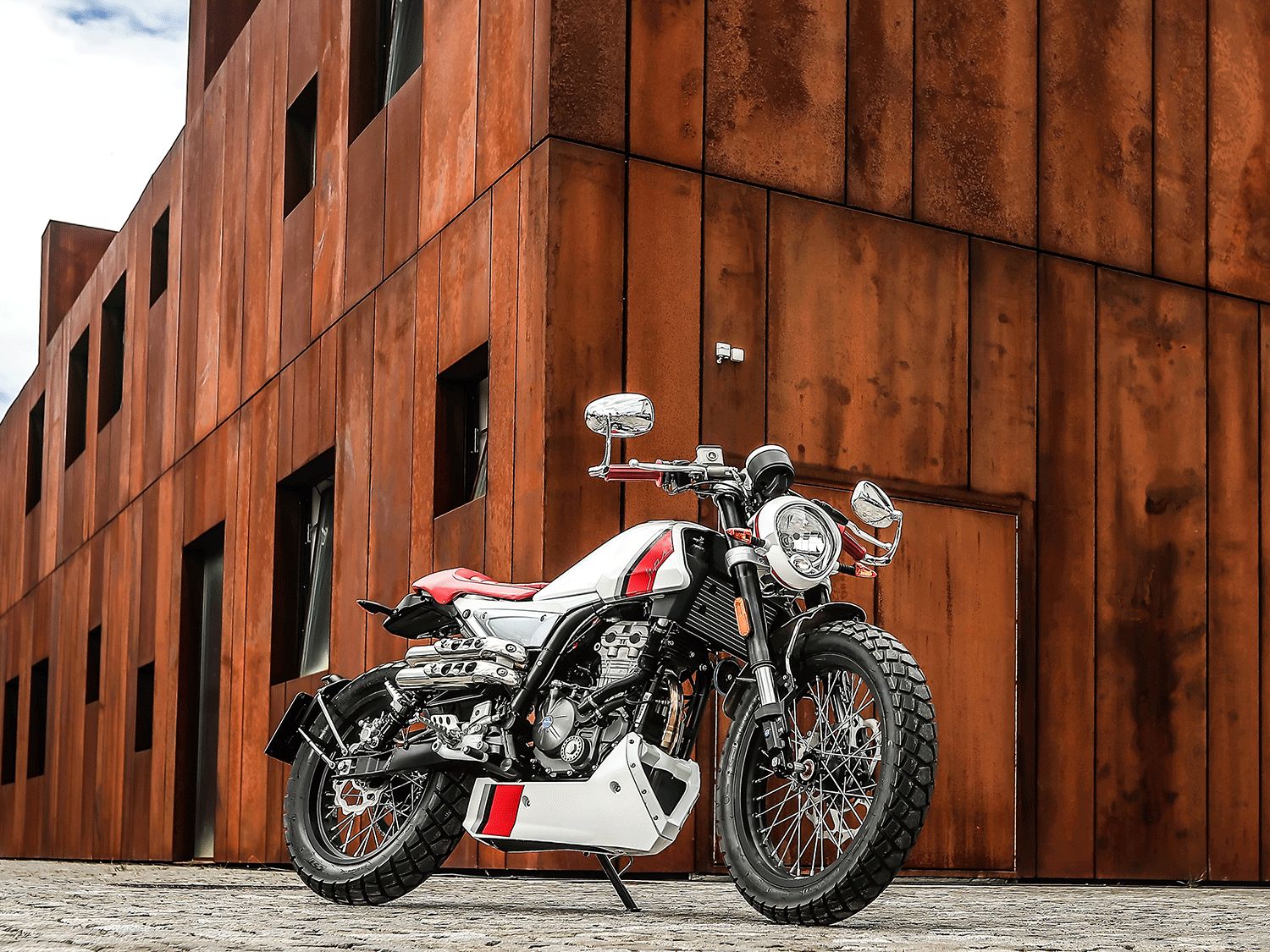 The model spotted in India is the FB Mondial HPS 125 which is powered by a single-cylinder, liquid cooled engine, tuned to deliver 13.4 PS of maximum power @ 9,750 rpm, and 10.5 Nm of peak torque @ 8,000 rpm. Other features include wire-spoke wheels wrapped in dual purpose tyres, upside down telescopic suspension upfront and twin shocks at the rear. It gets a flat handlebar with bar-end mirrors and disc brakes on both ends. A set of tall set, scrambler style exhaust pipes on the left amplify the style quotient.

Here are its specifications: