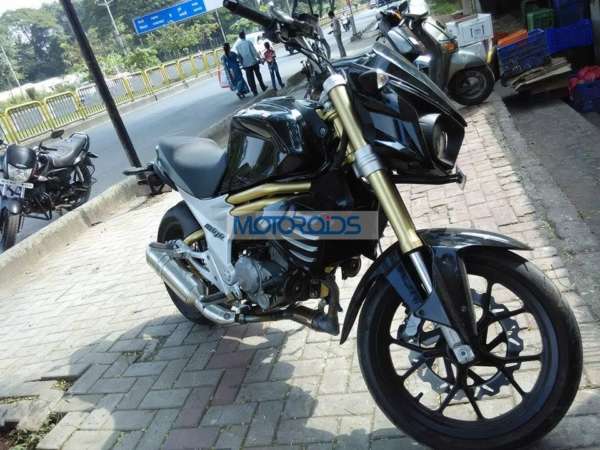 We believe that we would be showered with rotten tomatoes if we said we got our hands on more “SPY” images of the Mahindra Mojo. But we believe that we may dodge the bullet this time as these are the clearest images of what seems like a production ready motorcycle. These latest images were snapped in Pune by avid Motoroids reader Rejith Tee. The pictures showcase the Mahindra Mojo with absolutely no camouflage, laden with brand stickers on the tank, side panels and the tail of the motorcycle giving us maximum details about the final product. 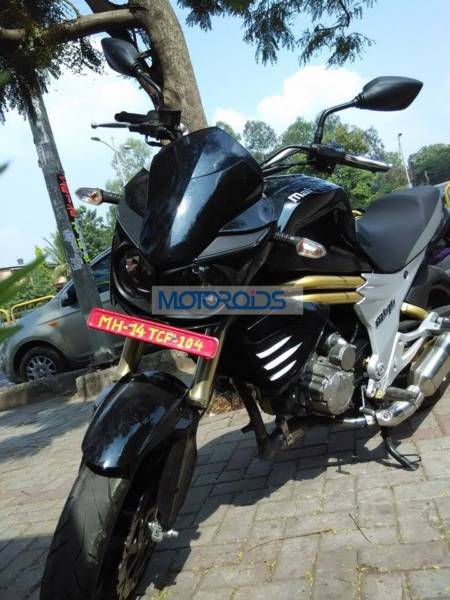 So what’s the takeaway? We feel that Mahindra, as a company, is deeply inspired by the animal kingdom. The Mahindra XUV500 was inspired by a wild cat and the Mojo, from what it appears to us, seems to have a windshield that mimics an elephant’s face. The twin headlight unit is cocooned in black plastic housing which also smartly hides the LED daytime running light strip. 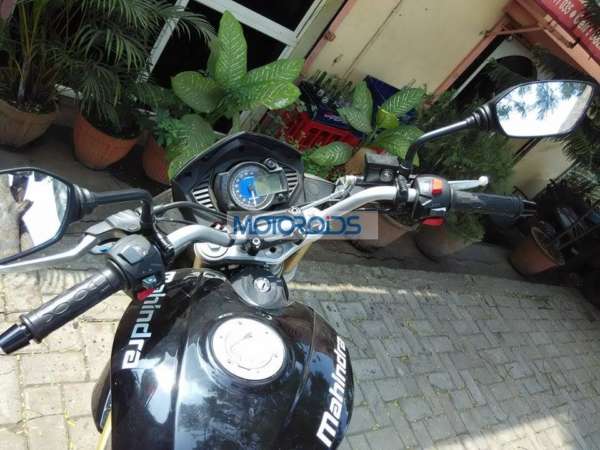 The analogue-cum-digital instrument cluster is surrounded by faux louvers, picking cues from Mahindra’s SUVs again. However, we were not impressed by the overall console design. The small, rubber covered, trip and clock reset buttons could have been well designed as this will be Mahindra’s flagship motorcycle. The tachometer gets a blue dial while rest  of the information is displayed on a rather conventional rectangular digital console. 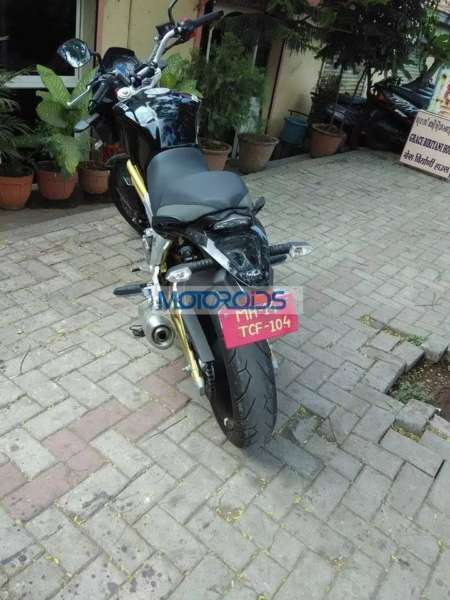 What we did like was the tank mounted key-hole which is a refreshing addition, it could have been finished a bit better though. The tank also receives very pronounced recess which lends the Mojo a rather awkwardly thin look. But we would hold our comments till we observe the motorcycle in the flesh. Stickers on the tank could also have been replaced with a 3-d emblem. The air-craft style fuel tank, however,  is a good addition.

The liquid cooled radiator is surrounded by air scoops which get a honeycomb design along with three satin silver slat pattern. What follows the radiator is a rather unconventional 90-degree bent exhaust pipe. which further splits into a 1 x 2 system. A steel heat guard on the pipe gives the exhaust a beefier look.

The rear end gets a clear glass tail light which seems to be a LED unit. The tail light is followed by an elongated tail section. The tail unit, instead of Mahindra’s brand name gets the company’s logo. Overall, the front end seems a lot beefier than the rear. 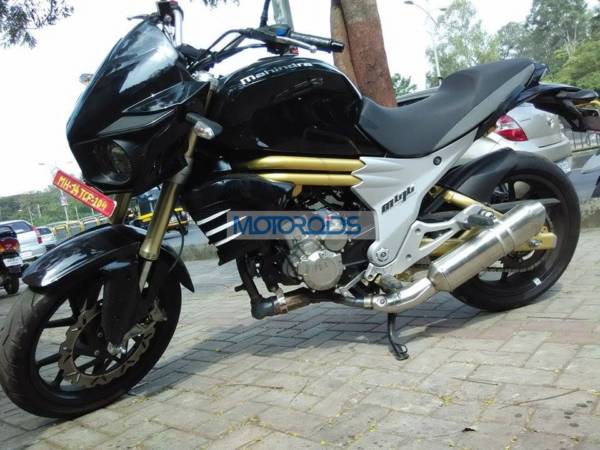 The riding stance, with high raised handlebar and relatively forward set footpegs, should give the rider a straight forward seating position. The Mahindra Mojo gets a single piece seat instead of a modern split units. The two-tone seat of the motorcycle in picture appears to be well cushioned for comfortable rides. The seat lock key hole is placed on the left, side panel of the motorcycle. The pillion grab rail feels to be low set than the conventional setup but appear to have ample space to hold on to.

Stopping power will be provided by a large, ventilated petal disc at the front and a conventional disc unit at the back. Steel braided brake lines offer a premium look and better utility to the motorcycle.

Mahindra Mojo is expected to be powered by a 295cc, four stroke, single cylinder, liquid cooled engine with Dual Overhead Camshaft (DOHC), capable of producing 27 bhp of power and 25Nm of torque. The power mill will come mated to a 6 speed gearbox.

Things that sum up the Mahindra Mojo:

What do you think of the upcoming Mahindra Mojo? Share your thoughts and opinions with us through comments section below. Stay tuned to Motoroids for more updates from the motoring world.