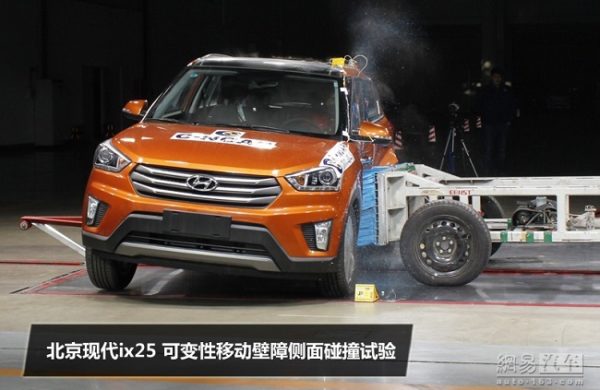 To be launched in India in 2015, Hyundai’s compact SUV, the ix-25 underwent crash testing in China under C-NCAP (China New Car Assessment Program) and scored a 5-star safety rating. Surprisingly, Hyundai used a base model for this test that comes without any side and curtain airbags. The compact SUV went through four tests under the assessment: 100 percent overlap crash, side impact, 40 percent overlap front and whiplash. 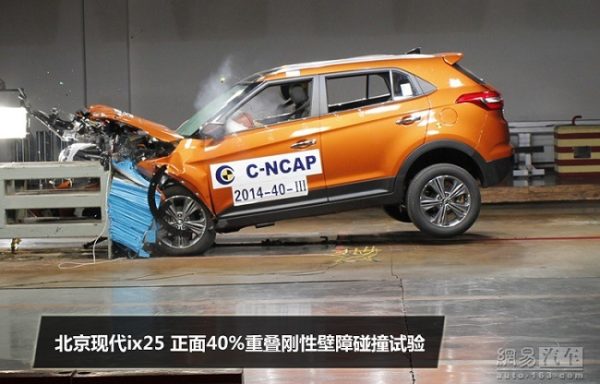 The 100 percent overlap frontal crash test was done at a speed of 50Km/h. Out of 18, the Hyundai iX-25 achieved 15.89 points. Whereas in the side impact test, carried out with a moving hard object travelling at a speed of 50-51Km/h, it scored 18/18 points. The 40% overlap frontal impact test was performed at a speed of 64Km/h, and the car received 14.11 points out of 18. In the whiplash test, performed at 15.65Km/h, the compact SUV scored 100 percent. To be launched in India post heavy localization, Hyundai has hinted that their compact SUV will be priced competitively and could take the market by surprise. The iX-25 in India could be powered by a 1.4-litre Kappa petrol and 1.4-litre CRDi diesel that also power the Verna.