Home News European GP: Mercedes GP And Force India Will Have Their Own Fight 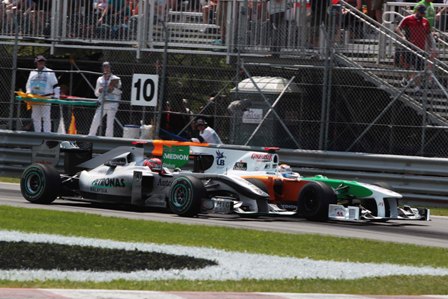 Force India Formula1 team are in their best season yet. They are 6th in the Constructor’s World Championship and have had consistently strong performances throughout the 2010 season. The Mercedes GP team, however, could be labeled in the opposite. After winning both the F1 World Titles in their debut season last year, the team surely seem to be struggling to get their car right to challenge the supremacy of the front runners, Mclaren, Red Bull and of course Ferrari. This could well be their worst F1 season!
Force India F1 do seem to be the most improved team from last season. From struggling to make it to the chequered flag, to scoring their first and only podium at last year’s Belgian GP to now finishing consistently in the points – infact registering a double points finish in Monaco and Canada this season, the FIF1 team surely seems to be mixing it at the top when the track characteristics do suit them. All of this by a team that is run on a mediocre budget as compared to the top teams. I wrote during the Turkish GP that the FIF1 team will be able to beat the Mercedes GP cars and here they are seem to be doing that already.
Mercedes Grand Prix on the other hand had a spectacular pre-season with the press. Their announcement of Michael Schumacher’s return to racing and that too out of the Ferrari stables created more PR stories around the world than their World Championship win. The buyout by Mercedes Benz too was followed closely by the press – again the return of the famous ‘Silver Arrows’. However, given their might, which not only includes the best engines, but also Ross Brawn, Michael Schumacher and Nico Rosberg, the team haven’t been their best yet. Yes, the entire structure is new, including the drivers, but they clearly seem to be fading away from the top this season.
Nico Rosberg at one point was the co-leader of the F1 Driver’s Championship, however, yesterday in qualifying he didn’t manage to break through to Q3. Michael Schumacher’s comeback year hasn’t gone as per plan and while many argue that the cars this year are totally different to the car he drove in 2006, patience is only limited and its only time that fans will give up on his come-back and only remember the Schumacher in his Ferrari days. In yesterday’s qualifying, barring the new comer teams, the only team that Schumi managed to beat were the BMW-Saubers – that too in a last ditch attempt!
Sunday’s race will only be interesting. The 4 Mercedes powered cars will line up mid-grid and will be in a race of their own is pretty certain considering that they failed to match the pace of the top teams. Whether it’s Force India that has picked up their game or Mercedes GP have lost theirs, the fight to the top ten will be fun and will also include the Scuderia Toro Rosso of Sebastian Buemi. It will be a tough race to say the least to even break into the top 10 since the Williams’ boys have found some pace but I am hoping that the Force India drivers do to Nico Rosberg what they did to Michael Schumacher in the last lap of the Canadian F1 GP, i.e. over-take him on the last lap! Let’s get geared for some good wheel-to-wheel racing!
Motorsports Partner: www.isport.in
News
,
Comments
Leave a Reply Cancel reply