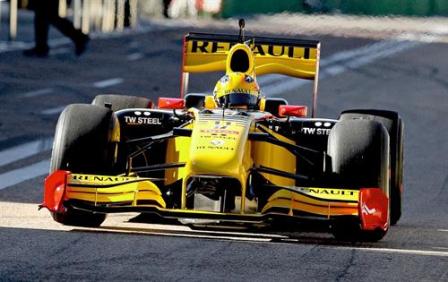 The Canadian F1 GP had thrown up an interesting race due to team’s and their different tyre strategies. Renault however were also exposed for their lack of horsepower. However, the just-concluded qualifying session at the European GP saw business return to normal. What was interesting to see is that all the 4 Renault-powered cars made it into the top 10. The Red Bulls were back at the top of the order, with Sebastian Vettel claiming Red Bull’s ninth pole of the season so far and his 4th.
The Renault of Robert Kubica had been surprisingly quick throughout the practice sessions and in fact, I was honestly disappointed to see him manage only P6 in final qualifying; specially given the proximity he had had to the Red Bulls all of Friday and early Saturday. P6 though is not a bad spot to start from and the car seems to have had benefitted a lot from the aero updates brought by the team in the last 2 weeks. The team has really been impressive, with updates being brought at an alarmingly fast rate and at almost each venue. And the fact that the updates are almost always instantly transforming into race pace improvement is a testament to the quality and determination of engineers at both Enstone and Viry.
It is rather important to note, that with the in-season testing ban, the only real time you get to test out new parts is on the Fridays before the race; and not every team comes to race weekends with updates that actually work like they are supposed to.
Vitaly Petrov too had a fairly good qualifying, claiming P10 on a track that he knows well from his GP2 days and where he has previously won in the feeder series. It will be interesting to see how he holds his nerves and his at-times rather obscure impulsiveness at this street-circuit, which like most street-circuits, is not very forgiving and punishes you for driver errors. I think both the Renaults have a very good chance of coming away from this weekend with some good points, although the race itself might be frustrating for Kubica, as he’ll find himself struggling to overtake the updated Ferraris of M/s Fernando Alonso and Co., who will do their best to keep the yellow’s at bay. And I think it will take all of Kubica’s craft to keep the F-Duct equipped McLaren of Jenson Button behind him.
The Renaults have taken a major step forward this weekend, as far as closing the gap to Mercedes is concerned. I think the second half of this season is going to see an interesting battle between Renault, Mercedes and Force India for the places 7-10. But the Renaults have clearly impressed most paddock observers, I included, as to just how quickly they seem to have risen to the 2010 challenge after the rather shameful off-track incidents of last year. Let’s have ourselves a super sports weekend then!