Only a few hours back, we reported that Indian automotive industry is struggling to overcome the phase of sluggish sales that it is currently dealing with. While various manufacturers are resorting to many ways and means to fight off the bad times, it seems like they are far from over! Dun & Brandster have projected a rather dull 2013 for car sales in India. 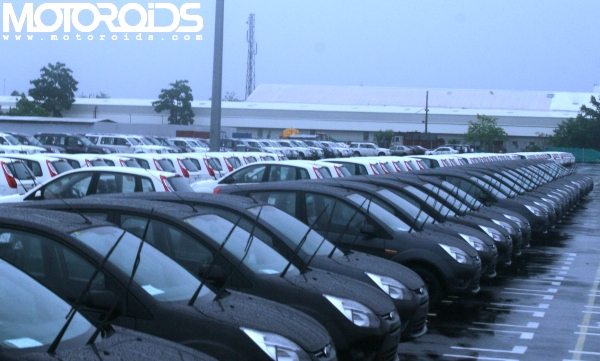 Following is the report from Dun & Bradstreet

The year 2013 was marked by a broad based slowdown in auto sales owing to sustained deceleration in economic activity and consequent weakness in consumer and business sentiment. Growth in domestic automobile sales slackened to a mere 1.2% in 2013 (Jan-Nov), as compared to growth of 6.2% during 2012 and 14.0% in 2011. While an immediate upturn in the auto industry is not expected, the worst may be behind us. Expectations of improvement in economic environment from the second half of 2014 along with potential interest rate cuts are likely to provide support to auto sales in the year ahead. We expect the deferred purchases to get converted into actual sales, mainly after the initial two quarters, owing to pick up in industrial activity and increase in infrastructure spending. Improvement in consumer sentiments particularly in rural areas would act as a positive trigger for certain segments and companies within the Auto industry. That said, increasing competition is likely to keep profit margins under pressure.

In 2013 (up to Nov), auto exports grew by 5%, driven by the exports of two-wheelers (4.2%). Auto companies increased their focus on overseas markets (mainly emerging markets) in an attempt to offset slowing sales growth in the domestic market. However, in the coming year, exports are likely to further lose some steam in light of the non-tariff barriers and preferential duty agreements inked by EU with certain African and Latin American countries. The latest move would act as a deterrent for auto companies who had begun to make strong inroads into these economies. The export environment for automobiles is expected to remain challenging in 2014, clouding India’s dreams of being an export hub.

In 2013, sales of commercial vehicles (CVs) entered into the negative territory as slowdown in industrial activity coupled with sluggish infrastructure spending, tight financing environment and frequent diesel price increases led to sharp contraction of 15% (upto Nov 13) in domestic CV sales. While sales of medium and heavy vehicles (M&HCV) continued their downward spiral (-29% upto Nov 13), the year 2013 saw the light vehicle segment (LCV – domestic sales down by 6.1%) also bear the brunt of weak macroeconomic environment and low freight availability. Sales of CVs are expected to remain under pressure till the first half of 2013 in view of sluggish industrial demand and surplus fleet capacity. Thereafter, expected improvement in economic environment and increase in infrastructure spending could bring about a gradual revival in demand. While the recovery in M&HCVs will lag revival in economic growth, LCVs (driven by the SCV segment) are expected to witness strong growth in 2014 owing to replacement demand and improving demand from tier II & III cities. The Phase II orders under the Jawaharlal Nehru National Urban Renewal Mission (JNNURM) programme are also likely to provide an impetus to bus volumes.

The buoyancy in domestic passenger vehicle (PV) sales has been on a wane since the beginning of 2013 (-7.5% upto Nov) as rising fuel prices and high interest rates led to sharp increase in ownership costs, deterring customers from making vehicle purchases. The year ahead will continue to remain challenging for the PV industry. Car makers are likely to go ahead with their capex plans in anticipation of demand recovery by the second half of 2014. Meanwhile, with the differential between petrol and diesel prices getting narrower, the coming year would witness the share of diesel cars in industry mix to gradually decline, considering higher prices of diesel vehicles.

The slowdown in two-wheeler domestic sales continued into 2013 as increase in fuel prices, high interest rates and inflation significantly weighed down urban consumer sentiment. Domestic sales of two-wheelers slowed down to 4.1% in 2013 (up to Nov) as against a growth of 5.8% in 2012 and 15.9% in 2011. We expect demand for two wheelers to pick up during next year, supported by moderation in inflation levels and revival in consumer sentiment. The under-penetrated rural market will be the key driver for the industry’s growth. Growth, however, is expected to remain in single digits.

Automobile companies across segments continue to face tremendous pressure on profit margins due to weak sales and heavy discounts offered by vehicle manufacturers to attract consumers to the showrooms. To withstand the ongoing slowdown, Original Equipment Manufacturers (OEMs) have adopted various cost rationalisation measures and also focused on innovation and quality improvement. Margins of auto companies are expected to remain stressed at least till the first half of 2014 in view of weak economic outlook. Competitive pressures are likely to increase going forward as some of the new OEMs scale-up their distribution reach, resulting in higher marketing cost. On the raw material front, prices of commodities such as steel and rubber are likely to remain firm in the coming year. However, we do not expect any sharp spurt in prices.