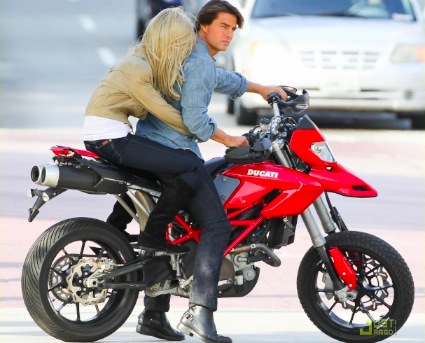 If you have watched the preview of Tom Cruise’s new upcoming movie titled ‘Knight and Day’ you wouldn’t have missed the sequence where our heterosexual hero screeches through the streets on a Ducati Hypermotard alongwith Cameron Diaz.
The eagle-eyed American Bike Journalist Wes Siler spotted in this picture that the Ducati used for shooting stunt scenes is infact, a disguised Aprillia SXV 550! It seems that the Aprilia is being used in the movie to perform difficult jumps and other tasks while the Ducati is being used for close up shots.
The Ducati Hypermotard was too heavy and fragile to pull off any stunts which is why the lighter SXV 550 was brought into the game. The Aprilia SXV 550 which weighs about 134 Kgs is much more easier to maneuver, control and land swiftly after those high jumps when compared to the Hypermotard which weighs about 190 Kgs.
So, now you know that when Tom Cruise is riding a a motorcycle with a smile and a chambray shirt, its a Ducati Hypermotard! And for all those nerve breaking action scenes of sliding or jumping, its not Tom Cruise heating up the scene but some of the professional stunt heroes asride the Aprilia SXV 550.
News
,
Comments
Leave a Reply Cancel reply