Home News Ducati Rebuttals – ‘Tom Cruise is on a Ducati!’ 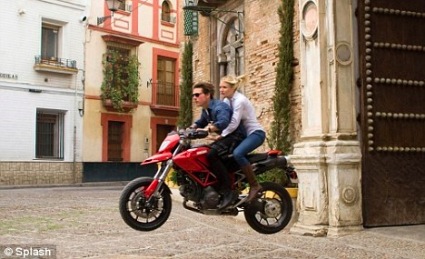 Earlier in the day, we reported that the Ducati used for stunt sequences in Tom Cruise’s new movie ‘Knight and Day’ is infact an Aprilia. The revelation was discovered by an American Journalist Wes Siler which obviously Ducati folks are not taking it well.
So, the company has now released the picture (shown above) supporting their claim that Ducati Hypermotard was indeed used in the making of the movie and the Aprilia/Ducati hybrid seen being ridden by Tom Cruise was only used in a promotional video made by ESPN.
Pheeww, after all the plotting atleast the Ducati and Aprilia fans are going to watch this flick just to make sure what motorcycle Tom Cruise is indeed donning with his pretty smile and hot babe.
News
,
Comments
Leave a Reply Cancel reply