Home Honda Honda reveals the 2011 Accord:goes on sale this August in the States 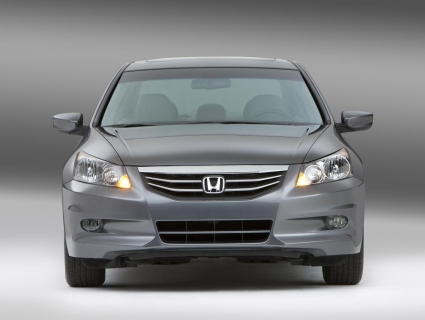 [Remember we had posted a set of scoop pics of the 2011 U.S Honda Accord. Now here comes the 2011 Accord in all its glory]

Honda has unveiled the 2011 Accord for the American market, gallery of which can be found at the bottom of the page. Honda has updated both the Coupe and Sedan with a newer design and better aerodynamics. This makes the car more streamlined, which results in lower drag, hence the car will be able to put its power to munch miles instead of fighting with the air-resistance. Reduced engine friction and a revised transmission system make this 2011 Accord more frugal than its predecessor. How frugal? Well Honda claims that the 4-pot motor coupled with an auto box now goes 2 miles extra (city) and 3 on the highway than the similar spec predecessor.

There are 3 engines available including the 3.5 L V-6 VTEC unit with the unique VCM( Variable Cylinder Management technology which shuts down a specific number of cylinders when not needed, in order to reduce the fuel consumption). The power is transmitted with the help of 5 speed auto and manual boxes. There is a 6 speed manual ‘box too which is available only on the ‘performance oriented’ (as Honda likes to call it) Accord Coupe. The same 3.5L engine finds home in this car sans the VCM tech.

Like we had earlier predicted, the Accord sedan gets a refreshed front grille and bumper which increases the car’s resemblance with the Honda Crosstour to an extent. The car gets a refreshed boot lid and new set of wheels too. Not much has changed with the car’s interiors and feature list though. The Accord we get here has the same design as the one sold in the States. So it won’t be wrong if we expect Honda to bring the 2011 Accord here too. The car goes on sale later in August this year in the US.

So its upto you if you want to wait for the slightly updated 2011 Accord or settle for the current one. But since Honda might launch a diesel variant of the same, isn’t it worth the wait?