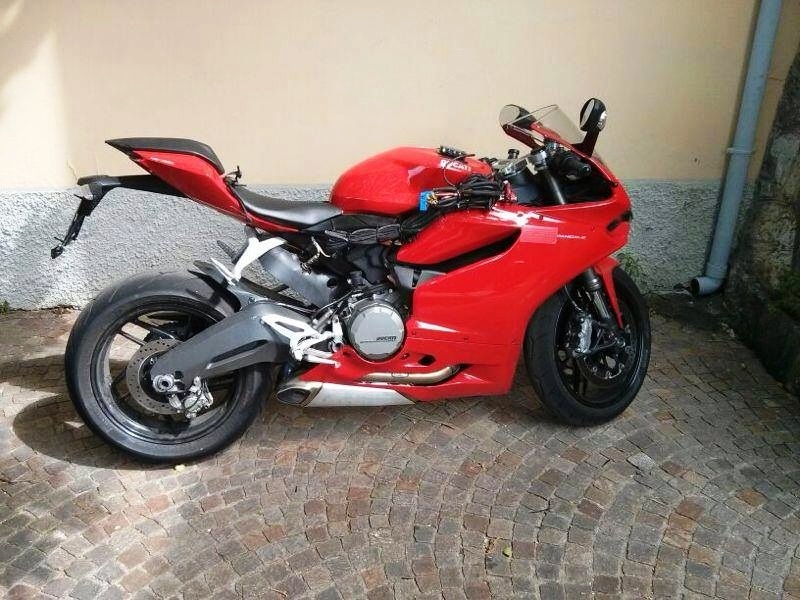 Looks like the rumour on the Ducati 899 Panigale as featured in our earlier article isn’t a rumour at all. Italian Online Motorcycle Magazine Motociclismo have managed to procure spy pictures of the Baby Panigale aka Panigalina reportedly clicked in Lecco, northern Italy.

To start with the cubic capacity on the side cowl has been hidden with adhesive tape. Stated to be a pre-production sample, the picture as reported earlier clearly shows a new dual sided banana swingarm in place of the exotic looking single sided swingarm. Also its reported that other exotic bits would be taken off the Ducati 899 Panigale that includes the front Ohlins suspension now being replaced with equally meaty Showa forks. Also the dual side banana swingarm is said to be from Sach’s instead of Ohlins TTX36 as seen on the Ducati 1199 Panigale. The 5 spoked alloy wheels though different in design to its elder sibling would most probably sport the Marchesini brand.

Coming to the most important part- the engine is being speculated to be a new superquadro (oversquare) rather than a bumped up 848 or the new 821cc motor found on the 2013 Ducati Hypermotard/ Multistrada. Power figures are being reported in the region of 150 to 160 bhp with the rev limiter placed at 11,500 rpm.

The pricing of the Ducati 899 Panigale is being speculated to be similar to that of the Ducati 848 Evo Corse SE, but with added tech and sophistication. The 899 should be up for exhibition at EICMA 2013 and a formal press announcement from Ducati on the baby Panigale is expected next month or October.