A select few have brought shame to the law enforcement department due to their corrupt practices. But then there are people like this traffic cop from Delhi who, despite heavy rains, was seen performing his duty to regulate the vehicle flow. A viral Facebook post by Mankan Bammi captured a traffic cop serving the people and regulating traffic despite heavy rains. Not only was this unnamed cop regulating the traffic, he also helped push a car that malfunctioned. The video was shot near Paschim Vihar. 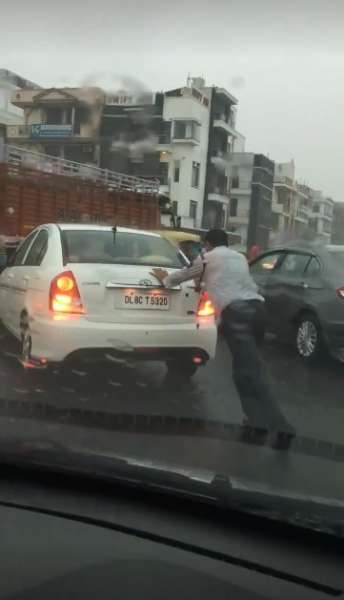 Mankan Bammi wrote in his Facebook post, “We people always criticise Police guys for their bad and mal deeds on the other hand we people should praise them too so that they serve us better. The most unfortunate part was I couldn’t ask his name due to heavy traffic but after when after crossing round about I asked for his name to another traffic guy, ASI Rakesh Kumar for name of that brave police man, Rakesh Kumar refused to tell me his name afraid of being complained of… I SALUTE FOR FORCES.”

Mankan Bammi’s Facebook post has since been shared over 17,000 times and has received over 45,000 reactions from the netizens. The video has garnered over 1.9 million views since it was uploaded on August 8, 2017. Here’s the video of the unnamed Delhi Traffic cop performing his duty:

Here’s the video of the cop pushing a car that suffered from some malfunction in the middle of the road:

He has earned our respect and we salute him for his dedication towards his duty.

(Social network figures were noted at the time of writing this article.)