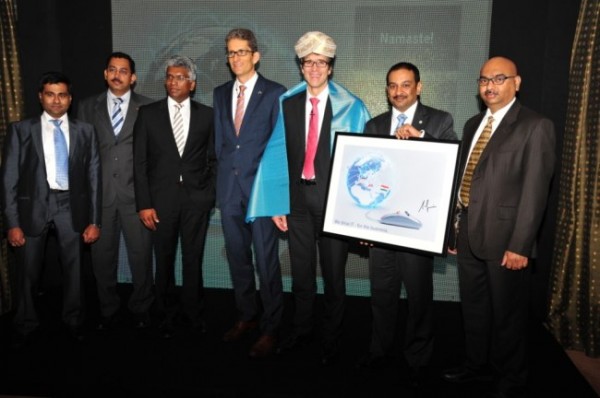 Daimler is growing worldwide. Information Technology is an important cornerstone to support and drive this growth. Within this scope and in accordance to it’s global IT strategy. Daimler held a press conference about its new‘Global Service Center’ for SAP and non-SAP system rollouts within the structure of MBRDI (Mercedes-Benz Research and Development Center India). MBRDI isone of the four operations of Daimler in India, besides Mercedes-Benz India Ltd. (MBIL) in Pune, responsible for production and sales and marketing of passenger cars, Daimler India Commercial Vehicles, which operates under the brand BharatBenz in Chennai, covering all activities for commercial vehicles and Daimler Financial Services, which operates under the brand Mercedes-Benz Financial Services for passenger cars and Bharat Benz Financial Services for commercial vehicles.

New SAP ‘Shared Service Centers’ are currently being developed in India and Turkey. Daimler IT is placing great emphasis on the skills of its own employees while expanding the facilities. In the new Shared Service Center,Daimler will create 800 new IT-jobs in Bangalore by 2015. Positive effects on IT suppliers and the IT sector in Bangalore can also be expected.

Wilfried Porth, Member of the Board of Management, Daimler AG, Responsible for Human Resources and IT, explains the new SAP Shared Service Centers as follows: “In accordance to our global IT strategy, we will further develop our IT department into a worldwide organization with strong international teams representing a striking variety of skills, know-how and foreign cultures.”

Daimler CIO, Dr. Michael Gorriz commented at the press conference: “We are transferring our expert knowledge to MBRDI,which in turn further develops our own specific know-how and expertise, back into our own organization as a global support. In the future there will be fewer external entities involved, but instead, a powerful organization will be in place through our global IT structure.”

The decision to locate the Global Service Center in Bangalore was based on the availability of a highly educated and skilled IT-workforce. “We are very proud that the new Shared Service Center will be located here in Bangalore. India is an important growth market for Daimler. By bringing new highly-skilled jobs to India, we underline our commitment and confidence to the abilities of the country,” said Dr. Jens Cattarius, Managing Director and CEO of MBRDI.

MBRDI, which has already gained importance in Daimler’s global IT world,currently employes 400IT-specialists, two third of it with focus on IT Engineering. The new Shared Service Center in Bangalore, will be important for Daimler IT in the future. This facility will take significant roles in the restructuring of SAP Application Development and Provision as well as optimizing the roll-out processes. 70 % of SAP activities worldwide will take place in the new Shared Services Centers in India and Turkey. India will be supporting the English-speaking regions and Turkey will be responsible for German-speaking countries. The Shared Services Centers offer the entire scope of services – from the final design of the SAP application to the implementation and support. In this way Daimler IT is in the position to use synergies and to promote best-practice exchange.

In the long term, SAP roll-outs will be implemented worldwide by the IT locations in Germany, India,Turkey- andin the USA. This will ensure that all IT applications will be introduced efficiently, fast and with greater planning security.