Chinese auto makers have always made it a point to go overboard with taking ‘design inspirations’ from popular models on sale in other parts of world. The Chinese auto industry has already received a lot of flak for this highly prevelant trend but it seems like the auto makers of our neighboring country are in no mood to mend their ways! 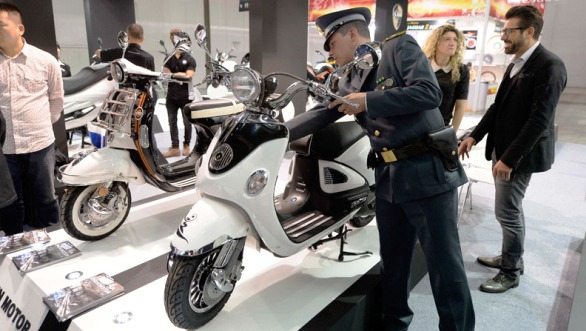 The good chaps at OD report that Chinese manufacturers displayed as many as 11 imitations of Vespa models at the 2013 EICMA!

Thanks to Piaggio crying foul, these scooters were later seized by the Mobile Unit of the Rho division of the Guardia di Finanza. Guardia di Finanzia is the financial law enforcement arm of the Italian military police. The seized vehicles violates 3D trademark registered by Piaggio. This trademark protects the typical exterior shape of the iconic scooter.

The Vespa has been present in India since 2012 and sells its 125cc automatic scooter model in two variants- LX and VX. Powering these scooters is a 3-valve single-cylinder four-stroke engine that has a max power of 10PS and peak torque of 10.06Nm. The VX variant, which was launched earlier this year, comes equipped with a front disc brake, a more ‘premium’ speedometer, stylish grab rail, and tubeless tyres.

Back at the 2013 EICMA, Vespa unveiled the new Primavera, which is highly likely to replace the LX lineup. The latest Vespa shares its base powertrain with the LX series but comes with a far trendier styling. Vespa will launch 125cc and 150cc models based on the Primavera and the smaller of these scooters could replace the LX125 in India soon after its international debut.

Do not be surprised if Piaggio Vespa Primavera greets you at the upcoming 2014 Indian Auto Expo.