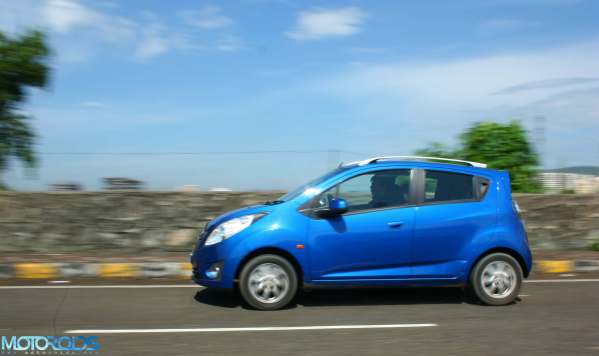 Chevrolet will be launching their Beat hatchback in a diesel avatar on the 25th of July. The car with an oil burner mill promises to become one of the most sought after small hatches for the city dwellers. With an ARAI certified fuel efficiency of 24kmpl, the Beat will offer an affordable, well finished and practical city car package with a frugal and drivable diesel engine.

the 1.0-liter three cylinder diesel engine of the car is good for about 58PS and 150Nm of torque. While those figures will clearly not help the Beat’s cause as an enthusiast’s car, they are sufficient to make the little Chevy a good package for the city.

The interiors of the car will remain largely unchanged, and the car will be almost the same as the new petrol version with the Smartech engine.

Various reports on the internet from magazines which have already driven the car suggest that the Beat’s diesel engine is a refined mill for an oil burner. It’s quiet, has a good bottom and mid range end punch which makes it very driveable. Chevrolet have softened the suspension a teeny bit to make the ride more cushy, and favourable for the city conditions.

A reasonable amount of grunt is said to be available in the region of 1600-3000 rpm, below or above which the car struggles. On the highway, speeds upto 110-120 are easily attainable after which the car shows some resistance. We will get our own turn to hold the steering wheel very soon, and will bring you a full road test report very soon.

As we reported earlier, the diesel variant of the car is expected to be about Rs 60,000 more expensive than the corresponding petrol variants. This will make the Beat diesel one of the most affordable diesel hatchbacks. For all we know the Beat diesel may become the biggest challenge the likes of the Hyundai i10 and the Ford Figo have witnessed yet.

What do you think of the new car’s prospects? Does it look like a promising product to you? Would you trade it for you i10 or Swift Petrol?