The quarter-litre segment, especially in Asian markets, has been the centre of all the action in the motorcycling space lately. While Kawasaki’s 4-pot 250cc Ninja is the current top dog, rivals are said to be developing similar machines to resuscitate the small-capacity, inline-four space.

At the bottom end of this battle, CFMoto has introduced the 250SR motorcycle in the Malaysian market at RM 15,800, or roughly, INR 2.8 Lakh. Imported in the country via the CKD route, the motorcycle will also be made available in a special-edition trim, which will be limited to just 30 units, for RM 17,800.

Powering the CFMoto 250SR is a 249.2cc, single-cylinder, liquid-cooled engine which produces 27.6bhp at 9,750rpm and 22Nm of peak torque at 7,500rpm. All that power goes to the rear wheel via a 6-speed gearbox. The bike is equipped with full-LED lighting, a colour TFT-display, and an underbelly exhaust. The suspension setup includes 37mm upside-down forks and a preload-adjustable mono-shock at the rear. Disc brakes at both ends are governed by dual-channel ABS.

While the chances of this motorcycle making it to India aren’t all that much, another fully-faired model which looks identical, the 300 SR could make it to our shores. This motorcycle is powered by a 292.4cc, single-cyl, liquid-cooled engine producing 28.70 HP at 8750 RPM and 25.3 Nm at 7250 RPM mated with a 6-Speed transmission. 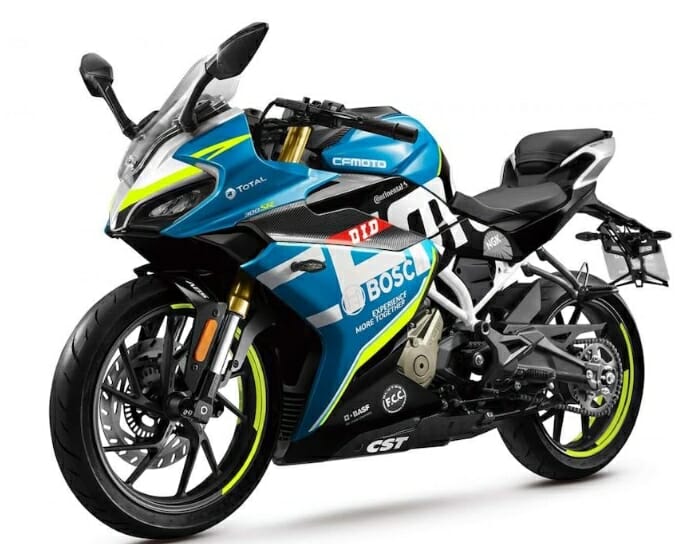 The CFMoto 300 SR comes with a 110/70/17 tyre at the front and a 140/60/17 tyre at the rear with a 292 mm front disc and a 220 mm rear disc coupled with the safety net of ABS. Suspension duties are handled by 37 mm upside-down forks up front and a mono suspension at the rear. Other specs include a seat height of 780 mm, ground clearance of 135 mm, kerb weight of 165 kgs and a fuel tank capacity of 12-litres. The SR in its moniker stands for Sports Racing and this motorcycle is available in two colours – Nebula Black and Turquoise Blue.