It was a few days ago, manufacturers were running worried about the excise duty reductions coming to an end. The Government though, eased a lot of pressure when it announced that, the reduction in duty will continue until the end of this year. It would’ve been a difficult state, had the duty reduction not been extended, as the extra cost would then pass on to the last person in the chain, that being the consumer.

The new Government hoped the extension in duty reduction will help a struggling automobile industry in the country and Maruti Suzuki has managed just that. The car maker has reported a growth of 33.5% in Car sales in June 2014, when compared to the same time last year. In June 2014, Maruti Suzuki managed to move 112,773 units, whereas, for the month of June in 2013 it had only managed to sell 84,455 units. These numbers include domestic sales and exports.

With this the company finished the first quarter on a high, selling 299,894 units, a growth of 12.6% over same period in the previous year. 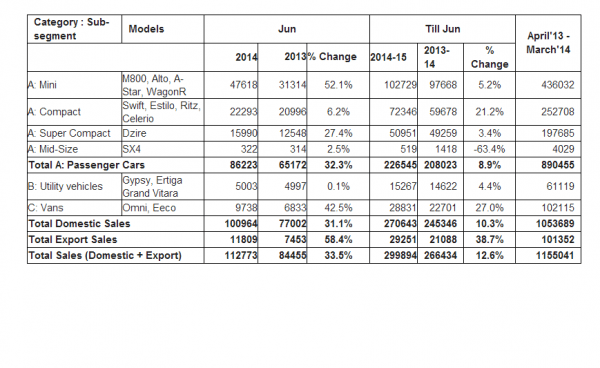